Are there more/less favourable phases of menstrual cycle to donate blood?

I was wondering whether it makes a difference when during the menstrual cycle a female is donating blood in terms of:

I am aware that females can donate blood during menstruation as the blood they lose does not directly come from circulatory system and the amount is not that big after all. As for the hormones - their levels do change considerably during the cycle and can affect a whole range of things. Can they also affect the blood quality or are such fluctuations rather negligible?

Hormones involved with Menstruation (FSH, LH, Estrogen, Progesterone, etc.) will vary depending in concentration depending on the time-frame: 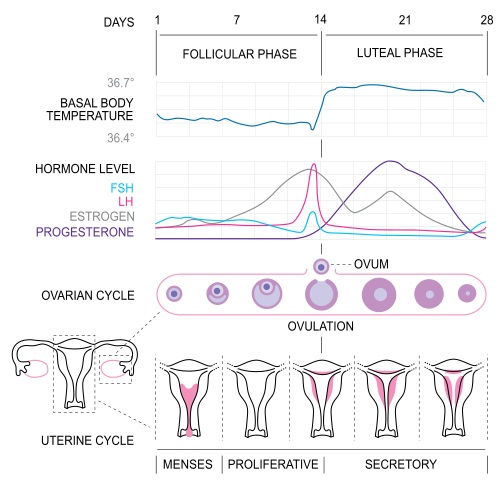 You are correct in saying that not much blood is actually lost in the menstrual fluid: Less than 80mL (80cc), although the blood's origin is ultimately the circulatory system. Does it affect the quality of the blood? No. Usually not enough iron is lost during menstruation to make a difference between being able to donate blood and not donate. However, women who bleed heavier than the average can experience anemia (iron deficiency) - although anemia attributed to menstruation is often misdiagnosed gastrointestinal issues (up to 86% error rate).

...the combination of blood loss from periods and donation will make iron deficiency anaemia more likely, particularly if the periods are heavy or prolonged. This effect can be minimised by taking supplemental iron.

In general, as long as the woman feels well or the pain is controlled, she is perfectly capable of donating as long as her iron levels reach the minimums. The blood makeup is not significantly different, although hormone and iron levels will minimally fluctuate.

As always, this response is based upon information during some light research. I am not a doctor, and the information presented in this response may be modified later to increase accuracy or remove errors upon the discovery of new information.

Not the answer you're looking for? Browse other questions tagged human-biology physiology endocrinology or ask your own question.

29
Are there any substance that are more dangerous at low dose than at higher dose?
1
Are all healthy animals more likely to defecate near the end of a rest-cycle?
4
Are we more/less resistant to infectious diseases during an allergic reaction?
1
How does the body respond to blood donation; are there any possible risks?
1
Are there known functions of AST, ALT, and amylase in the blood?