Why is gyrification advantageous?

Question(s): But this explanation is woefully lacking, why does surface area matter at all? That implies that somehow empty space is contributing to cognition (since the alternative is that space being filled with brain matter).

My best guess: The only guesses I have are that perhaps it functions like skip layer connections in Residual ANNs. This section of the wiki page, says it is advantageous because 'it allows neurons to be closer together' which I guess kind of corroborates my idea?

Question(s): But it is still far too vague and speculative. Why could these same wiring patterns not just emerge within a smooth-surfaced brain without wasting space? Also, does this imply that if you got more brain matter to fill in these spaces later your intelligence would decrease?

Short answer
The structural anatomy of the cerebral cortex is closely related to its functionality. The cortex is a thin sheet of only a few cell layers deep. Expansion of processing power requires enlargement of the surface area of this sheet, and simply increasing its volume doesn't help. As a consequence, gyri and sulci developed during evolution to accommodate this restriction.

Background
The human brain is characterized by a prominent and enlarged cortex, much larger than that of other primates. This is mainly due to the great expansion of the cerebral cortex during evolution. The underlying structures have, however, remained stable (Toro et al., 2008). The cerebral cortex houses the higher cognitive functions that separates us from other animals, allowing us to reason, talk, write books, develop culture and so on. As a result, to allow the development of these higher cognitive functions in man, it was the cortex that needed expansion, and not the deeper more ancient brain structures that govern more basic needs of life (breathing, heart beat etc.).

Because the cortex forms only a thin sheet a few cells thick that overlies the rest of the brain, a solution had to be found when the cortex was expanding in our early hominid ancestors, because the whole brain did not need inflation, just the cortex. Folding of the cortex increases the surface-to-volume ratio such that an expanding cortical surface fits onto a relatively stable base.

To take this a step further - why not increase volume in order to fit those extra neurons in? Since the volume of a ball increases by a third power with radius, why on earth would nature keep holding onto increasing the surface area, and not simply inflate the cortex by enhancing its thickness?

This has to do with the fact that the vertical architecture of the cortex has remained remarkably stable during evolution. In other words, evolution of a bigger cortical area to enhance higher cognitive processes has occurred in the most parsimonious way so typical for evolution: take an existing structure and enlarge it when there is need for more.

The cortex typically consists of a thin sheet covering the brain, and is not more than 3 mm thick. The neocortex represents the great majority of the cerebral cortex. It has six layers and contains between 10 and 14 billion neurons. The six layers of this part of the cortex are numbered with Roman numerals from superficial to deep (Fig. 1). Layer I is the molecular layer, which contains very few neurons; layer II the external granular layer; layer III the external pyramidal layer; layer IV the internal granular layer; layer V the internal pyramidal layer; and layer VI the multiform, or fusiform layer (Review of Clinical and Functional neuroscience, chapter 11). 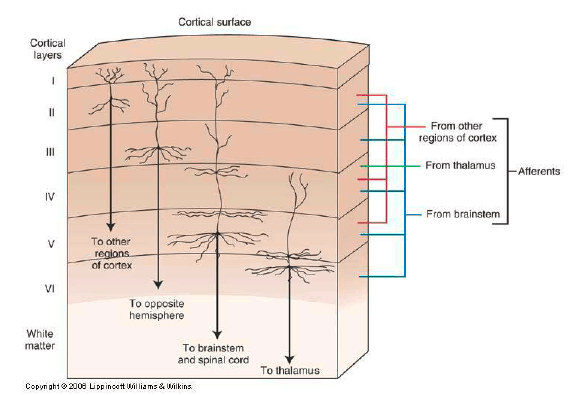 Basically, layer IV receives most input from the periphery via the thalamus (visual, auditory, tactile inputs etc.), layer II/III takes care of horizontal projections for further processing, while layer V takes care of the output (motor output etc.). This basic architecture cannot be changed easily without changing the entire core workings of the cortex. As an analogy - to speed up computers in a parsimonious way, one can expand the number of processors quite easily. Coming up with a speedier processor is difficult these days, as evolution of single processor capabilities is pretty much at a dead end.

Not the answer you're looking for? Browse other questions tagged human-biology neuroscience brain neuroanatomy or ask your own question.

22
Why does regular exercise increase brain volume?
35
Why do the two hemispheres of the brain control the opposite sides of the body?
9
Why do humans alone have the capability to have religious/spiritual experiences?
9
Why has evolution made neurons use spiking?
8
Why did the Brain develop in the front in most organisms?
35
Why is the brain white?
6
Why ambidextrous persons are so rare?
3
What is the heritability of brain gyrification?
4
Why is the hippocampus considered to be a cortical structure but not the amygdala?
1
Why is the chordate nerve cord described as hollow when it appears to be solid?