What is a DNA-binding domain?

I am confused about the term DNA-binding domain. Does it mean that there are some parts of the DNA that tend to coil up? Does it happen because some proteins tend to stick around that area? Also it is my understanding that with some proteins DNA (say for bacteria like E. coli) tends to coil up. Do we know what is the approximately the size of these coils? What is a ‘motif’ in this context.

The term "domain" in biochemistry and molecular biology is usually used to refer to a part of a protein that has a conserved structure and function, is similar between related proteins, and can generally exist or function on its own if it was separated from the rest of the protein. A DNA-binding domain is a protein structure that has a high affinity for DNA, and so binds to it when the two molecules are in the same vicinity. An example is a type of protein called a transcription factor, which binds to DNA in the nucleus of the cell (in Eukaryotes, bacteria and Archaea don't have nuclei - the DNA just floats free) and causes changes in the transcription of genes. The following image from WikiMedia shows how transcription factors work in general. 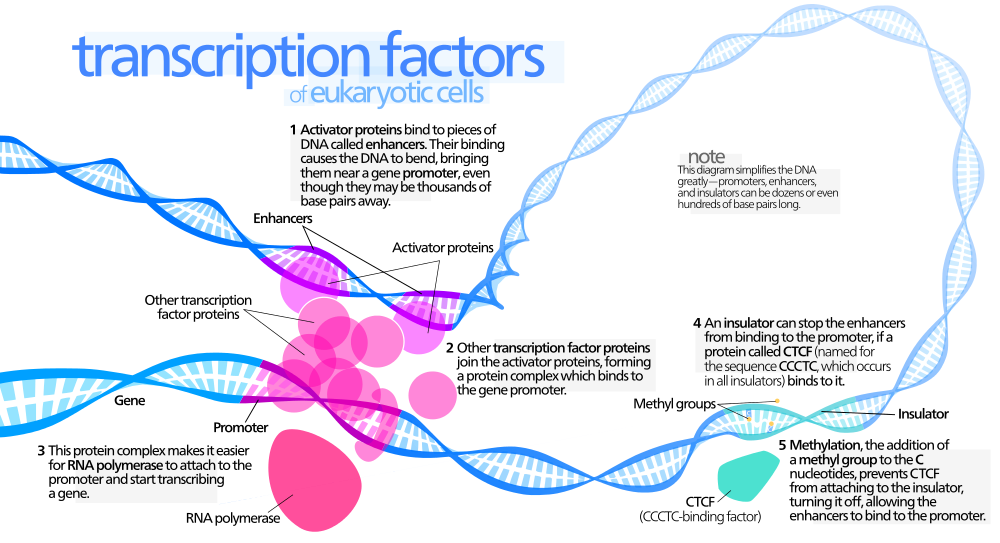 "DNA coiling" is a very generic term that describes many different things. The basic structure of DNA itself is a coil, with two sugar chains (the deoxyribose in DeoxyriboNucleic Acid or DNA) coiling around each other, and attached by nucleic acid bases. In the eukaryotic cell, individual strands of DNA are associated with structural proteins to create chromatin, which is what makes up chromosomes in the nucleus of each cell. In the first stage, naked DNA is wrapped or coiled around structural proteins called histones into a structure called a nucleosome. These then stack into a "solenoid" or fiber structure, which makes up so-called "relaxed" chromatin - regions of the genome where active transcription is taking place. If a part of a chromosome has been marked as inactive, or during certain steps in the cell cycle when one cell splits into two (mitosis), the fibers further coil into condensed chromatin, forming the typical structure many people associate with chromosomes. This image, from Wikipedia, visualizes each step in the process. 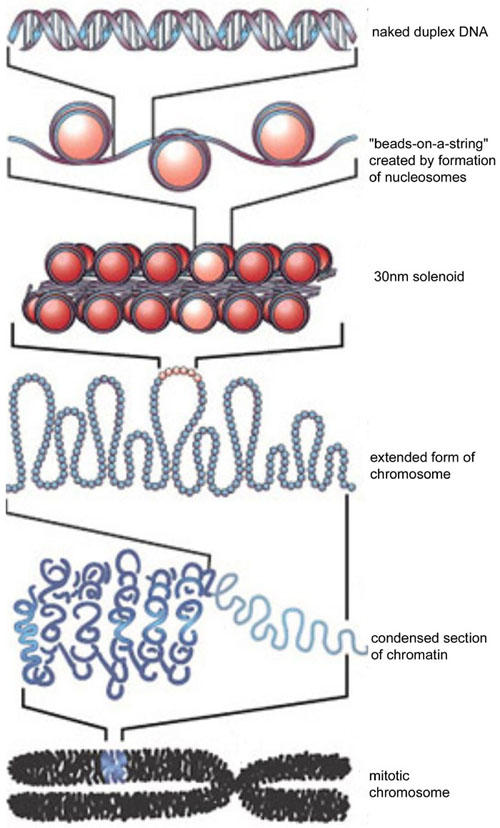 The word "motif" can sometimes mean the same thing as domain - for example, someone might refer to a "DNA-binding motif" in a protein. However, a motif is typically smaller than a domain, can occur in DNA, RNA, and proteins, and has to do with the specific sequence. A "structural motif" in a protein is something like a helix-loop-helix or a beta-hairpin turn that can appear in multiple different kinds of protein domains, and doesn't necessarily have the same exact function in those different domains, but typically has a fairly conserved sequence that is very similar. As an example, the zinc finger motif is found in protein domains that bind DNA, RNA, and other proteins.

All of this terminology can be very confusing at first, but if you stick with it it'll get easier over time. Biochemistry and molecular biology are fascinating fields, so keep up your studies!

Not the answer you're looking for? Browse other questions tagged biochemistry molecular-biology dna or ask your own question.

1
Influence of temperature on protein binding and decay rates
4
protein-binding sRNAs
5
In CRISPR bacteria, how does viral genomes get integrated into the spacers of CRISPR? Also, in its use, where does Cas9 cut the DNA?
3
Is Sda a protein, or is it a protein domain of DnaA?
1
How does DNA determine all of our hereditary traits?
3
Is there a term for the opposite of intergenic?
5
Meaning of ‘motif’ in molecular biology