Why do genes, encoding the same proteins and in the same conditions, have different expression?

Is it possible that two genes, which come from two different cell cultures and which encodes the same protein, produces different quantity of mRNA? If yes, why?

My question comes from the fact that I am doing statistical analysis of a microarray dataset for the hyperthermophilic archaeon Pyrococcus furiosus exposed to gamma irradiation. Microarray experiments measure relative quantities of mRNA in a cell. My file has values, for each gene of the genome, that are positive or negative since the scientists who performed the experiment made the log10 ratio between the fluorescence intensity of the sample that was irradiated and the reference sample (not irradiated). Indeed, in the microarray experiment we have two channels that typically are one for the "controls" and the other for the cells which are stimulated by an event (in this case the event is gamma irradiation), in order to make a comparison.

In my dataset there are two columns (that are indicated as "reference") that refer to the case in which they should have put the cell cultures not irradiated in both the two channels. I would expect that the values in the file corresponding to these two columns are 0 (since they are the log10 ratio between the intensities of the signals of the genes which encode the same protein and that are in the same conditions). Instead they are different from 0. Therefore I wonder what is the reason for which there is different quantity of mRNA produced from two equal genes? 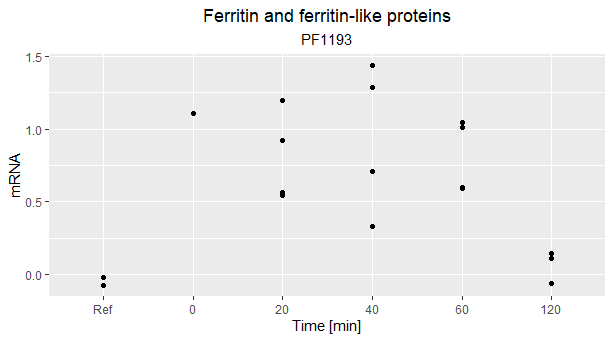 Is it only due to some noise or are there biological reasons ? (the picture refers to a gene which encodes Ferritin-like proteins but it is the same story also for other genes).

Even though I think that my interpretation of the data is correct, I tell you that the dataset I am talking about is here, if you want to have a look.

If I understand your question and graph correctly, your Y-axis is log(x/REF), where REF is some external standard. Your "Ref" on the x-axis you expect to be the same as REF, so that log(Ref/REF) "should be" zero, but you find it is not.

However, it looks like the mean(log(Ref/REF)) is still approximately zero. This is what I would expect: values that deviate a bit from perfectly 0, but having an average around 0 (and this average should approach 0 the more samples you have per the law of large numbers). You don't expect to have zero variance in data like this, which is why you repeat the experiment a number of times. You'll notice you have variance in all of your categories.

It is entirely possible that different cell-lines express the same genes at drastically different levels.

The proteinatlas provides data and analyses on differences between certain tissues or cell types / cell-lines.

If your cells are of the same line/tissue, then they might still differ dependent on the cell-cycle, age and external factors. There are chemicals that facilitate cell-cycle synchronization.

But I agree to the other answer, that your observations could be within margin of error.

Not the answer you're looking for? Browse other questions tagged homework gene-expression rna mrna microarray or ask your own question.