From this paper, it is stated that some introns may contain genes coding for miRNA, miRNA is essential in regulating gene expression by pairing with RNA, hence disrupting regular translation.

From this answer, it is stated that introns are broken down and the nucleotides will be recycled by ribonucleases.

The answer to Question 1 is:

The ribonucleases responsible for digesting removed intron RNA do not recognize the miRNA as such. They are unable to digest it because (or to the extent that) it assumes a double-stranded structure, as they are specific for single-stranded RNA.

The answer to Question 2 is briefly:

By the same mechanism as the many microRNAs transcribed from the DNA using their own promoters rather than from the promoters of the genes containing the introns in which some occur. (And some intronic microRNAs have separate promoters.) This involves a different enzyme that does recognize the microRNA region.

The mechanism of generation of microRNAs from their precursors

This is shown in the diagram below adapted from a review by Lucas et al. of the situation in Drosophila. It is initiated by the recognition by Drosha of the double-stranded RNA formed by the self-complementary miRNA sequences in whatever single-stranded RNA. 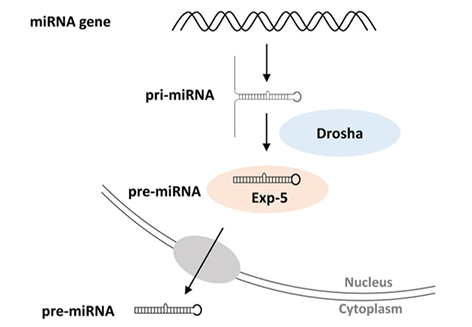 The pre-miRNA moves to the cytoplasm where it is further processed to the single-stranded active form. 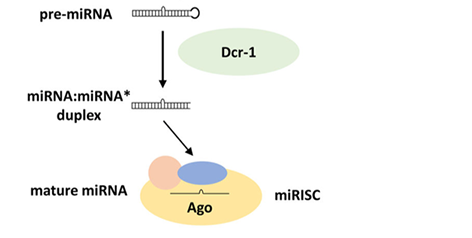 …it’s not quite so simple. MicroRNAs are not the only small RNAs found within introns. It is quite common to find small nucleolar RNAs (snoRNAs), which function to recognize methylation and pseudo-uridylation sites on rRNA; and although these snoRNAs have double-stranded regions, these are less extensive than in microRNAs (see e.g. this review). Our knowledge of the details of digestion of excised introns by RNase is sketchy, but it may be better to consider the situation in terms of competition between two types of RNA-binding proteins for the small RNAs (and even mRNA). On the one hand there are the RNases that will digest the RNA completely — on the other hand there are proteins (like Drosha in this case) that recognize some feature of the RNA and bind to it. Once the latter bind, the 5′-end of the RNA would be protected from digestion by exo-ribonucleases. So it would not be a question of all or nothing, but a balance, which has the advantage that it can be regulated — tipped one way or another — depending on the relative proportions and activities of competing proteins.

6
What happens to the cut-out introns from a pre-mRNA?