I was trying to find out more about gustation and the transduction of sourness when I came across the supposed inward-rectifying potassium channel $\ce{K+_{ir} 2.1}$. Here's the thing, despite being inward rectifying, all the articles I read about it involves it sending potassium ions out of the cell. I thought that maybe there is a special mechanism that makes it outward-rectifying, or just switches off its mechanism for inward rectification but to no avail.

So here's the context: On taste buds that detect $\ce{H+}$ ions, when intracellular pH rises due to intake of protons, potassium channels will be closed which causes accumulation of $\ce{K+}$ and thus depolarisation. The article pinpoints $\ce{K+_{ir} 2.1}$ as one of the potassium channels involved, saying that its inhibition will allow for depolarisation. This doesn't make sense to me, if this channel is supposed to prefer intake of potassium ions and almost entirely prohibit outward flow. If we want to accumulate potassium in the cell, shouldn't this channel be left open?

The only thing I can think of is that this channel remains open at membrane potentials near that of resting potential. So maybe then there is no selectivity over which direction the ions travel, so there is a net outward flow?

I'll link some of the articles I mentioned below:

"Inward rectifying" doesn't mean "only allows inward current". Current through inward-rectifying channels can be (and often is) entirely outward in physiological settings.

For a non-rectifying channel, there is a linear current-voltage relationship. If you plot current through the channel at various holding voltages, you get a straight line.

For inward-rectifying potassium channels, you get less current as you depolarize, like this: 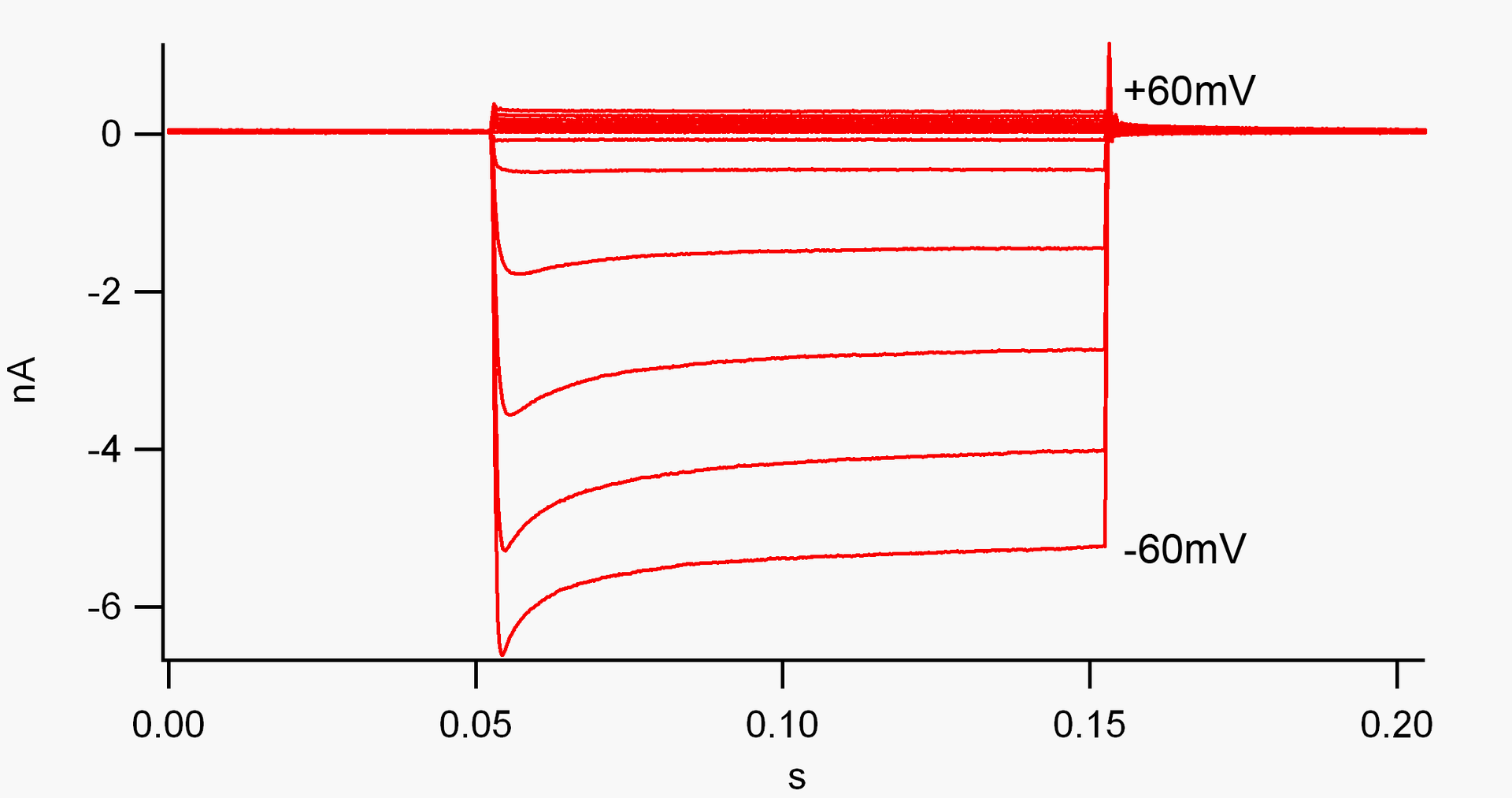 However, this relationship does not upset the equilibrium potential for a given ion. For a potassium channel, if you have a cell with a potassium reversal potential that is more negative than the membrane potential, you'll still get an outward flow of potassium ions (in the figure, note all the lines above 0, representing voltages more positive than the potassium reversal potential; they're positive/outward even if they're small). What is different for the inward-rectifying channel is that as you depolarize the cell, the current does not increase the way you would expect it to increase for a non-rectifying channel.

its inhibition will allow for depolarisation

Any channel permeable to some ion (or combination of ions) will tend to move the voltage towards the reversal potential for that ion/ions. So, as long as potassium reversal is more negative than threshold, all potassium-only conductances are inhibitory, whether they rectify or not.

Not the answer you're looking for? Browse other questions tagged biochemistry molecular-biology proteins gustation or ask your own question.

1
Molecular cause of cramps, spasms and strengthening in muscles? (incl. intro to muscle contraction)
2
Help me understand my membrane potential assignment
4
What is the role of potassium acetate in plasmid extraction?
4
How can sodium and potassium from burned organic matter (ashes) reenter the ecosystem?
4
Ischemia-induced deploarization in excitable cells