Nomenclature of substrates for DNA synthesis

However, it is unclear to me whether the terms refer to the same molecule as one uses the term nucleotide and the other uses nucleoside. What confuses me is that nucleoside is a compound with a purine or pyrimidine base and a sugar and a nucleotide is the same but with the inclusion of a phosphate group.

The systematic chemical names of many important biological molecules are too long to write routinely in full, and in any case were preceded historically by abbreviated forms which generally stressed the distinguishing features of importance to those studying their metabolism. Thus, as the poster points out, a molecule such as dATP (image below) has a base-(deoxy)sugar-phosphate(s) structure, and can be termed a deoxynucleotide. Adding triphosphate provides the additional information that there is more than one phosphate. A base-sugar(deoxyribose) combination is, as the poster states, a deoxynucleoside, but by extending this name to deoxyribonucleoside triphosphate, one indicates the addition of phosphates, so that one is, by definition, describing a deoxynucleotide. The reference to ribonucleoside indicates that the sugar is ribose, a specification lacking from the other definition. However, in practice these two terms are used to describe the same entity, one which might a little more completely describe as 2′-deoxyribonucleoside triphosphate (to indicate the position of the reductive change). This answer attempts to explain with precision the aspects of the nomenclature that are likely to be important to the biochemist or molecular biologist.

The original question might be considered not to represent a biological problem, and one might argue for closing it on that account. However because of the very nature of trivial nomenclature, it is difficult for those without experience of the usage in a field to find the answer. In answering it I have tried to broaden the scope to include the aspects of structure that I feel are most likely to be to biological students. 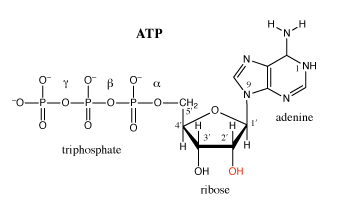 Alternative names for this ribonucleoside triphosphate, in decreasing order of complexity, include: 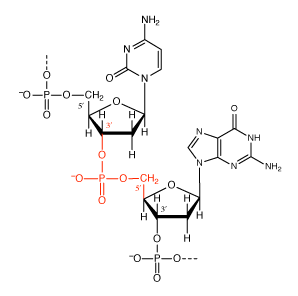 The image above is for DNA, but before addressing the nomenclature there, we would point out:

Finally we come to a structure of interest to the poster, dATP: 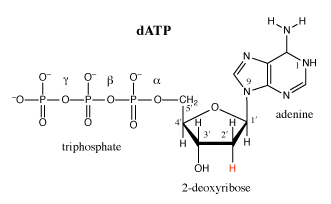 1 Topical example related to base modification
2 Speculation on the origin of biological homochirality — not SE Biology
3 Why does ATP sometimes produce ADP and sometimes AMP?
4 Sanger sequencing by chain termination
5 Difference in stability of DNA and RNA

Not the answer you're looking for? Browse other questions tagged biochemistry dna pcr dna-replication or ask your own question.

-1
Why do we use word prime with base pairing in DNA such as 5-3 prime.. prime stand for?
24
Why deoxyribose for DNA and ribose for RNA?
3
Understanding the strategy of Sanger DNA sequencing
2
What determines whether a reaction using ATP produces ADP or AMP?
1
Does N1-methyl-pseudouridine occur naturally in any RNA?

3
From a computer science perspective, how is DNA compared for various purposes?
6
Twist in the DNA double-helix
7
DNA as a digital storage medium; sequences algorithmically avoided for safety reasons (or should be)?
2
Misunderstanding about nucleotide biosynthesis
3
Chemistry of phosphodiester bond formation by DNA polymerase