Dissection techniques for fruits and seeds

I'm doing some amateur botany, and I was keying some plants in the Brassicaceae (Cruciferae) family, which requires detailed information about the seeds of the plant. My question is, in a seed, how can one identify features such as:

It also seems like the key parts of the seed will be within the seed coat; it's not always obvious how to remove this seed coat, or what methods exist. Are there resources for this sort of thing?

As a more concrete example, I've identified this Cardamine hirsuta from my backyard, but I'd like to verify some features of the seeds. Unfortunately, the seeds are very tiny, as this microscope photo of the silique shows, and the features are non-distinct.

Flora of North America provides these details for the Cardamine genus:

How can I figure out from dissection whether the cotyledons are accumbent or not? At least, that's the sort of question I'd like to be able to answer. 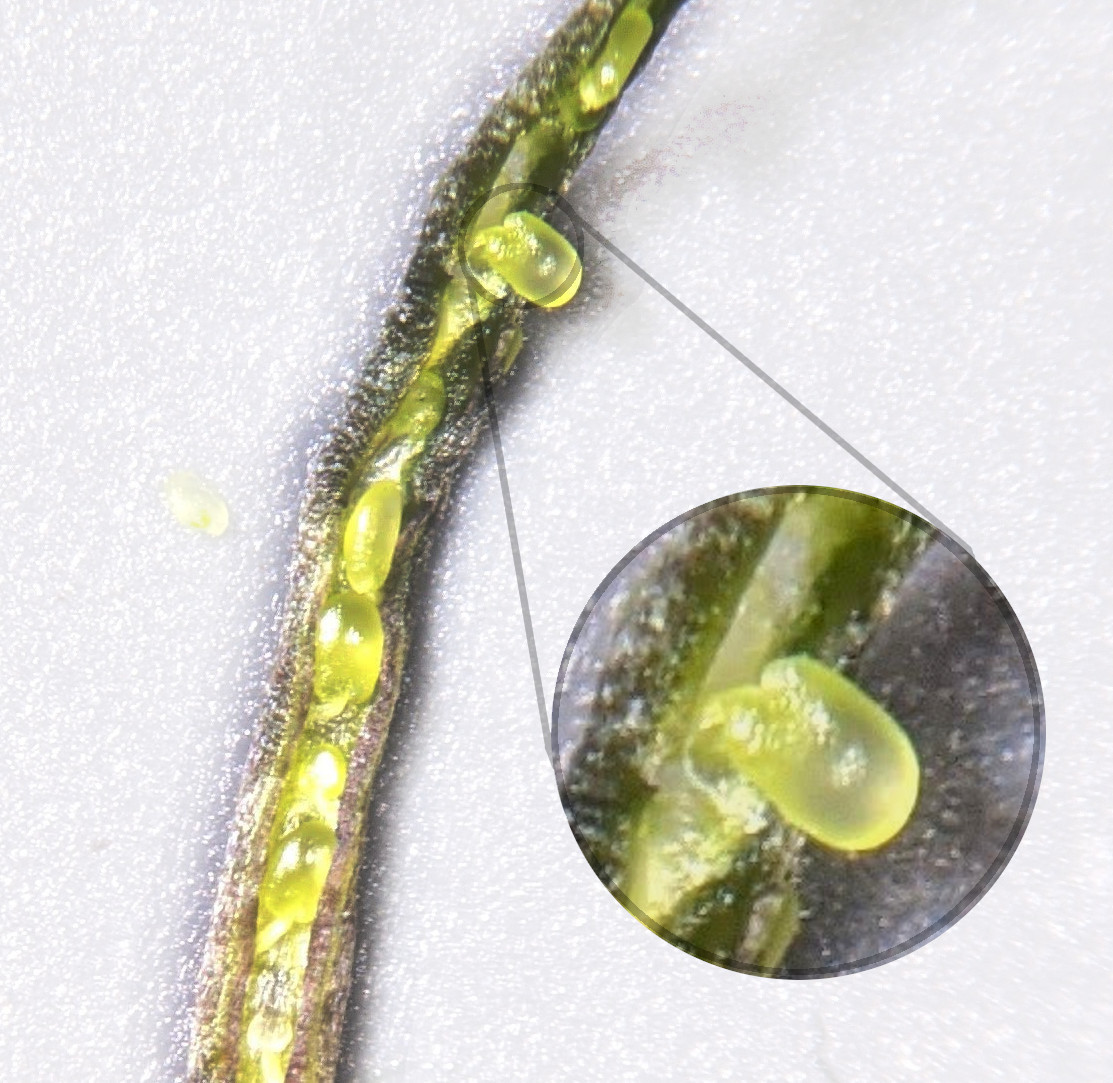 I will answer my own question for anyone that's interested in doing something similar. First, a great reference for seed morphology is A. C. Martin's The Comparative Internal Morphology of Seeds (1954), available on JSTOR and from sci-hub.

To dissect a seed, you’ll probably want to have a good dissection microscope, two pairs of sharp tweezers, a razor blade, and a pin. Begin by opening the fruit to expose the seeds; for a silique, it’s very easy to peel the valves open. Be careful not to crush any seeds. Using the tweezers (and optionally the razor blade) separate a seed from the fruit by breaking or cutting the funiculus. Do this for at least a few seeds, more is better. The seed coats will protect the seeds from drying out, but be aware, once the seed coat is removed, the embryo will only last a minute or two before becoming completely dried out. You'll figure this out pretty quickly, if it's a problem, otherwise don't worry. 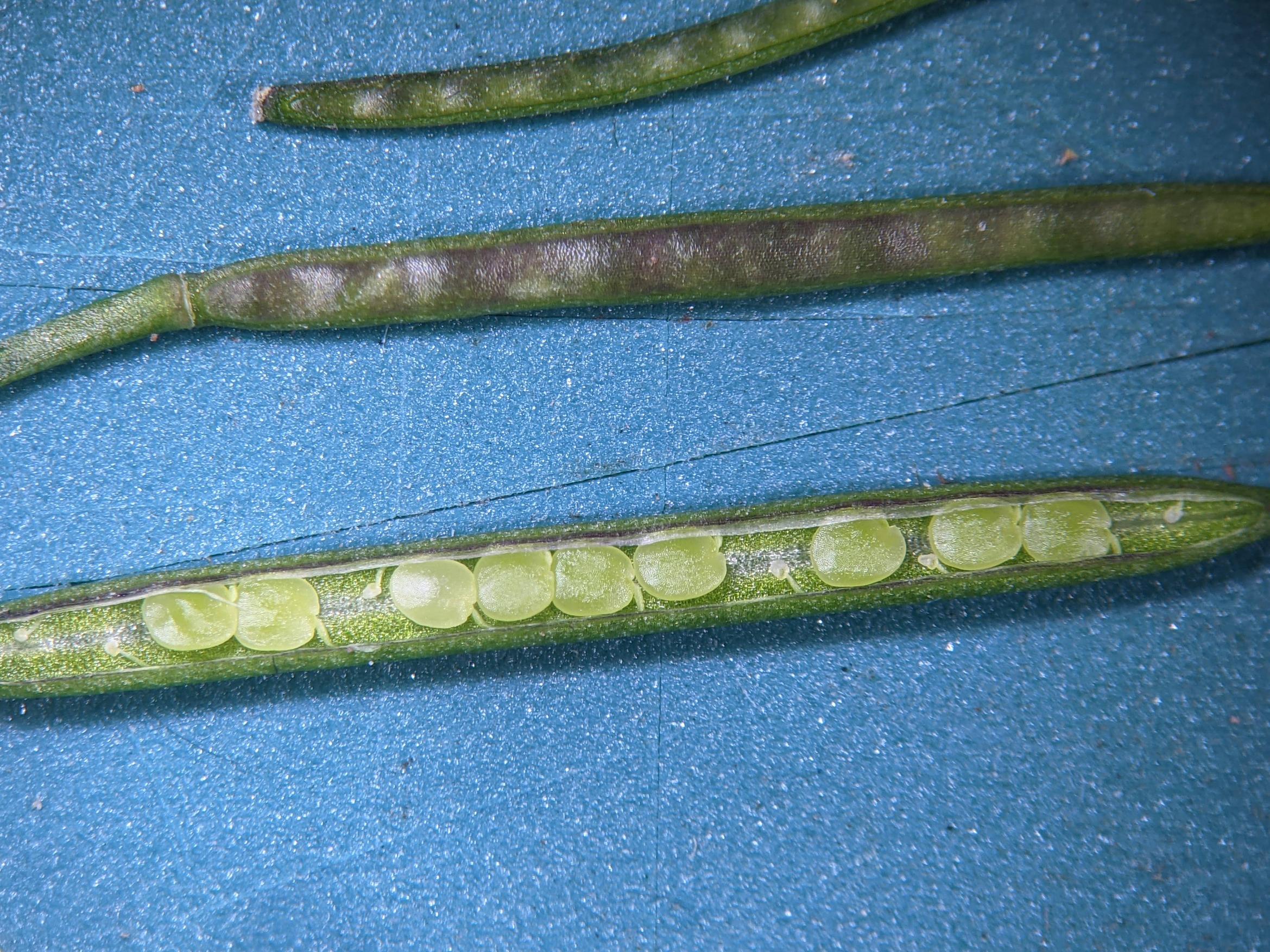 Seeds in the silique, all still in their seed coats.

Use the tweezers to position a seed so you can cut it with the razor blade. To get a good idea of how the embryo is arranged requires several dissections, cutting the seed in different ways (vertically, horizontally, parallel to the work surface); seeds are cheap so just experiment. Cut the seed open and you should have something that looks like the image below. 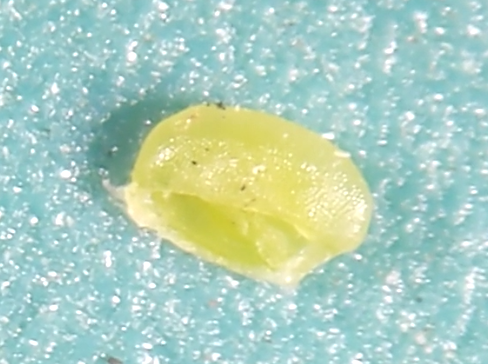 Seed of Cardamine hirsuta cut in half.

What you’re seeing is (a) the seed coat, and (b) the embryo. Use the tweezers and/or the pin to get the seed coat away from the embryo with as little movement as possible to preserve the formation. 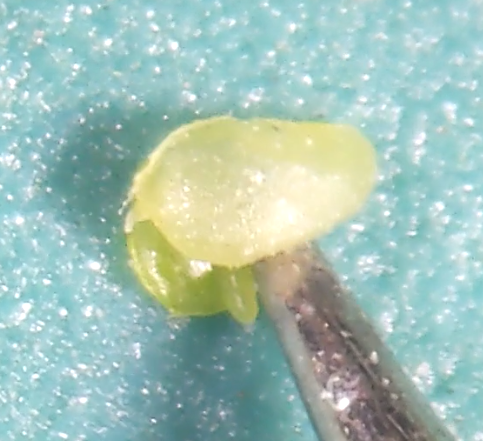 Using a pin, separate the embryo from the seed case. Note that the distinct features of the embryo are becoming visible. 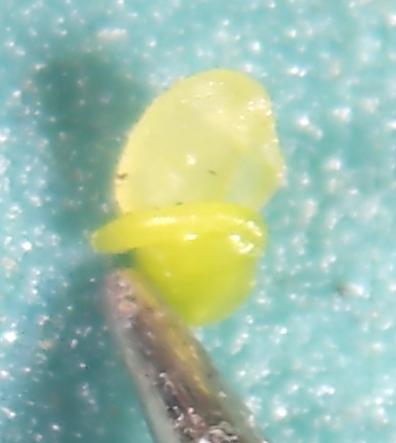 With the seed coat (pale green part) removed, the radicle and the cotyledons become visible and distinct. This seed is accumbent. 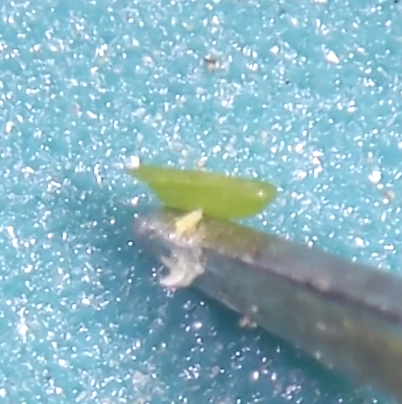 The two cotyledons are pressed together in this example, but you can still see a separating line between them when you hold the embryo at the proper angle.

When dissecting seeds, do yourself a favor and select the most mature fruit available. Your life will be much easier if you have a larger specimen. These stills were taken from a video I made, available on YouTube here.

Not the answer you're looking for? Browse other questions tagged botany dissection or ask your own question.

2
Is it ok for Chili pepper plant's fruits to fall into its soil?
0
Seed Germination
12
Why are fruits so large compared to their seeds?
6
Can plant fruit and seeds be albino like animals?
6
Protein in fruits
3
What is this tree and fruits?