What happens during metamorphosis?

We were studying butterflies in class and I asked my 7th grade teacher, but she deemed the concept "too complicated." I'm really curious now, not only about butterflies but insects in general...

First of all, metamorphosis is a molting-related process. It's regulated by the same hormones and they share many characteristics. In insects with uncomplete metamorphosis, this is very visible, since the "metamorphosis" is the last molt, wich usually involves growth, sexual maturity and the development of functional wings.

The choice between a regular larval molt is determined primarily by the levels of juvenil hormone, wich decays during the last larval instar (pupae and adult are instars, too). The molting is triggered by a peak of ecdysone, an steroid.

Once the insect has entered into the state of pupae, the organs start to suffer diverse changes. The formation of adult organs de novo arise from some special structures called imaginal discs, wich are clusters of stem cells that are more or less isolated in the larvae.

Position of the imaginal discs in Drosophila. Source. 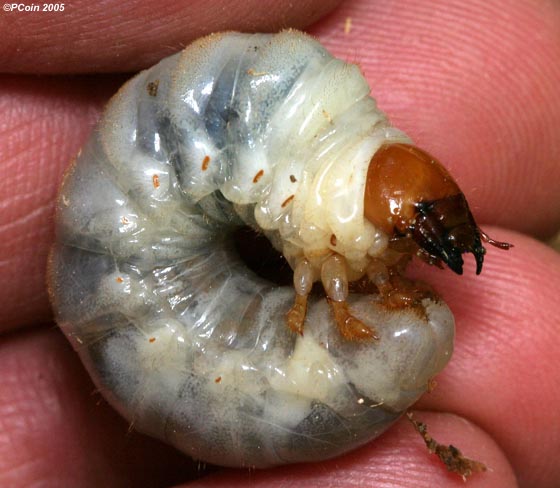 A typical larva of a coleoptera of the genus Lucanus. Note the mandibles and the legs. Source.

Some other organs remain more or less the same, such as the hearts or many parts of the nervous system. On the other side, some larval organs needs to dissapear and suffer programmed cell death. The gut, many parts of the nervous system, between others, suffer modifications that may be more or less drastic. In many cases this happen by simple growth and differenciation of the tissue or degeneration by apoptosis, but in some others the whole organs suffers apoptosis and regenerates itself with adult characteristics. For example, the innervation of the abdominal parapods (false legs) in caterpillars suffer a progressive degeneration, while the opposite happens in toracic nerves, wich will have to control legs and wings. This whole process is pretty similar to embrionic development and it shares many traits with it.

Finally, metamorphosis in other animals, such as crustaceans, vertabrates (fishes and amphibians), echinodermae, annelidae, cnidaria and many others will probably vary widely. I know for sure that amphibians metamorphosis is regulated by tiroid hormones, but I'm not even sure that many of the other examples have even been studied at a phisiological level.

6
Length of dispersal flight of European spruce bark beetle?
15
How to protect my mounted insect specimens from ... insects?
5
How can I measure bee and wasp population?
9
Small jumping bugs inside Swiss flat
2
I can't Identify this "bug" that seems attached to fresh cut wood
1
Can you identify these tiny black insects please?