What hair color will result in someone inheriting both blond and ginger genes?

Both the genes for blond hair and ginger hair are recessive, so they need both parents to give the same gene for it to take affect. What happens when a person has 1 copy of a recessive gene and another copy of a different recessive gene.

They don't have enough of the recessive genes to have either blond or ginger hair, but they don't have a dominant gene to "take charge"?

Hair color is not so simple as that. Most traits, especially those as complex as color, are controlled by many alleles at many loci. That's why there are different kinds of brown, blond, and red hair in the population. There is no "hair color gene." A fascinating paper came out a few years ago, identifying dozens of SNPs playing a role in hair and eye color. It's a deep, deep rabbit hole that we have only begun to plunge into.

EDIT: To summarize, it's very complex. This paper performed genome-wide association scans looking at two comparisons each for eyes (Blue and green, blue and brown), hair (red or not, blond or brown), and skin (freckles, sun-sensitivity). The researchers looked in a group of Icelandic and Dutch individuals, which means they only looked at a small portion of human variability (i.e., very few African or Asian genomes, for example). Still, just from those simple comparisons, their scans:

revealed 104 associations that reached genome-wide significance, accounted for by 60 distinct SNPs, of which 32 showed genome-wide association with only one pigmentation trait, 12 with two traits and 16 with three traits.

That is to say, they found 60 DNA bases that explained their data. Roughly half of those only affected one thing (eye, or hair, or skin, but only one), a fifth of those single base changes contributed to two different traits, and a full 25% of those SNPs were related with three traits.

That's still pretty hefty. Basically, they found 60 things that can affect hair, eye, or skin color, and some of those can affect some or all of those at the same time. And they only looked at people from two countries. Here's a figure where they summarize the seven strongest SNPs; you can see how tricky it can be to explain colors. 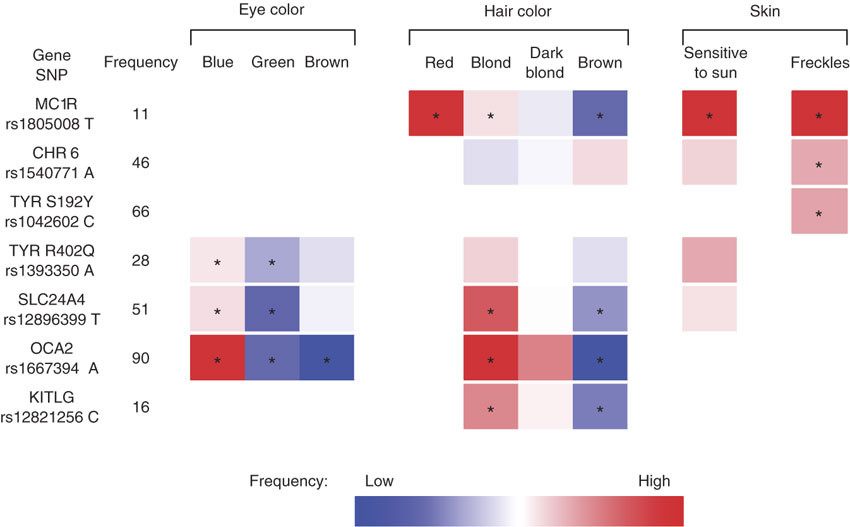 Not the answer you're looking for? Browse other questions tagged human-genetics genetics pigmentation hair or ask your own question.

2
Accuracy of a particular genetics test

11
What determines if an allele is dominant or recessive?
10
Why aren't green eyes more prevalent?
2
Recessiveness of allele for protection of organism
3
Concept and analysis of Pedigree
5
How can I verify my true genetic relationship with my close relatives with simple physical traits?
1
What is the difference between Haploinsufficient and Autosomal Dominant mutations