In addition to Linneaus-inspired taxonomies of the botanical world, I suppose there are some other proposals for different kinds of taxonomic accounts, perhaps for specific sub-domains of botany or perhaps historical. I'd be keen to learn about those.

Additionally, if any of you know there are some other alternative non-taxonomic approaches to botanic classification that are widely-used in sub-domains or in the early days of science, I'd be keen. I guess there are still some "common sense" classification to be made between use (ornamental/non-ornamental; medicinal/edible/poisonous), but perhaps there's more.

The most common alternative to taxonomic classifications are functional classifications. Emphasizing ecological similarities rather than similarities in relatedness, they can be regarded as complementary approach to, but not as a replacement of taxonomy. Why do we need this? Because species often perform very similar tasks, exhibit very similar characteristics and, most importantly, are very, very numerous (there are ~ 300,000 vascular plants). Reducing this redundant complexity is crucial for decision-making in conservation politics or the projection of vegetation change under future climatic conditions (Woodward & Cramer, 1996).

The idea behind this is to use functional traits, such as seed size, height, photosynthetic pathway, root density, etc., as a surrogate of a species' ecological 'role' -- its response to environmental factors and its impact on ecosystems. Seed mass for example (functional trait), is a proxy for the dispersal ability of a plant (function, performance). You should have a look at Lavorel et al. (2007), there is a nice table (too big to include here) that links specific traits to the actual ecological functions they describe. But look at this figure from the same paper: 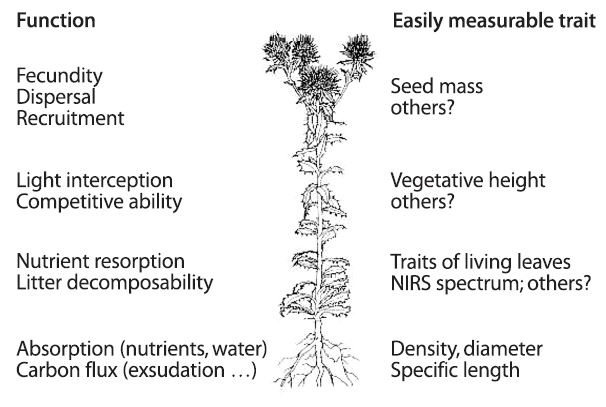 By applying multivariate statistics like cluster analyses or ordination methods, species can then be classified into functional types. To make up one example, a functional type that might emerge from species with the following traits

would certainly represent climax forest trees. This classification does not distinguish between individual species, because, from an ecosystem perspective, they all are functionally roughly equivalent.

For further research google 'Functional trait', 'Plant functional type' or have a look at refs 3 and 4.

Not the answer you're looking for? Browse other questions tagged botany taxonomy or ask your own question.