What are the upper and lower limits for chromosome length? Are these limits different in different species or kingdoms? If there is any limit, which cellular or molecular factors are reasons?

There is both an upper and lower limit which are species specific. The upper limit is caused by incomplete segregation of sister chromatids and subsequent trimming of the long arm(s). The reason for the lower limit is, as far as I can tell, unknown.

In these papers they found that in mono- and dicotic plants and one animal, the chromosome arm length is limited to half of the average length of the spindle arm axis (the length between the centromeres). Due to the mechanism and its presence in both plants and animals, it might be reasonable to expect that other domains of life are subject to similar constraints. Schubert and Oud (1997) speculate that the spindle axis length is fixed species specifically. 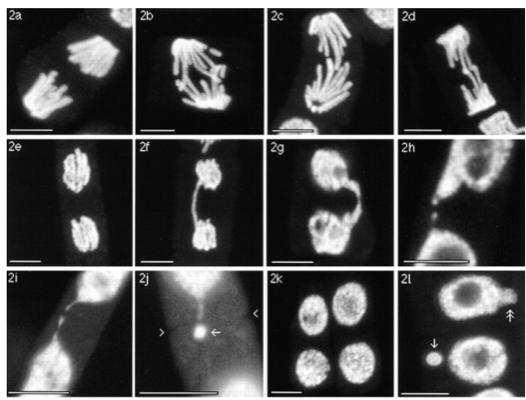 These are confocal microscope images of dividing Vicia faba (bean) cells (Schubert and Oud, 1997). (a) Wild-type cell at anaphase. (b-d) When the chromosome arms are longer, the chromatids cannot be completely separated at anaphase. (e) Wild-type cell at telophase. (f, g) Longer chromatids cannot be separated sufficiently and a bridge forms between the two daughter nuclei. (h-j) The bridge is broken when the cell plate forms. (k) Wild-type cell at interphase. (l) Breaking of the bridge between cells with lengthened chromosomes creates irregularly shaped nuclei and micronuclei - these micronuclei represent loss of DNA from the genome and are eventually lost outright through further cell divisions.

There is a lower limit, but it doesn't seem that anyone knows why, which makes it impossible to accurately define.

Schubert and Oud (1997): Data from various eukaryotic kingdoms indicate the existence of a lower limit of chromosome size for stable mitotic and meiotic segregation. Yeast artificial chromosomes do not exhibit normal meiotic stability until they are of a size between 120 to 500 kb which comes close to the order of size of native yeast chromosomes, in addition to functional telomere and centromere sequences (Niwa et al., 1989). For a Drosophila minichromosome, an island of complex DNA of 220 kb was shown to be necessary for proper centromere function (Murphy and Karpen, 1995). However, for stable mitotic and meiotic segregation an additional 200 kb of a flanking satellite sequence was required. For stable achiasmate disjunction of minichromosomes during meiosis in female Drosophila, 1000 kb of overlapping centric heterochromatin sequences are necessary (Karpen et al., 1996). Schriever-Schwemmer and Adler (1993) have shown that a minichromosome representing the small centric product of a translocation between chromosomes 7 and 15 of the mouse and comprising about 1% of the haploid genome got lost during meiosis in the female carrier organism while the corresponding product of a translocation involving chromosomes 4 and 8 did not. The latter was somewhat larger. Either this different behavior was due to the presence of essential genetic information on the small translocation product 4⁸, or the minichromosome 7¹⁵ was just too small for stable segregation, although it contained a complete centromere as well as telomeres. Finally, we have observed that the frequency of meiotic missegregation, but not of transmission to the next generations, is inversely correlated with the size of translocation chromosomes in Vicia faba (Schubert et al., 1986). Thus, the existence of a proper length range for eukaryotic chromosomes is obvious.

Of course, "present" in that paper refers to the late 90's but, in my admittedly brief search, I have been unable to find too much in the way of more recent results. The following paper seems somewhat promising, but I don't have access to it and can only quote from the abstract. It's not much more recent, either.

Schubert I. 2001. Alteration of chromosome numbers by generation of minichromosomes -- is there a lower limit of chromosome size for stable segregation? Cytogenet Cell Genet 93:175-181.

[A] lower size limit for a stable chromosome transmission … might be based, for instance, on insufficient lateral support of centromeres or on insufficient bivalent stability due to the incapability of chiasma formation.

Not the answer you're looking for? Browse other questions tagged chromosome genomes dna-helix or ask your own question.

9
What determines the number of chromosomes an organism carries?
1
Why the genome is divided into several chromosomes and not just a single big chromosome?

5
What phenotypes can arise from gender-related aneuploidy?
3
Publicly available genotype data?
9
What determines the number of chromosomes an organism carries?
2
What is the length of the centromeric repeat sequence in a human?
3
Are Y spermatocytes faster but less resilient than X spermatocytes?
4
What are homologous chromosomes?