In case of Mitotic Division, we say that if the total number of cells formed by mitotic divisions are $x$, then counting from the first cell onwards, we get $x-1$ divisions ($N$)

This is fairly logical to me 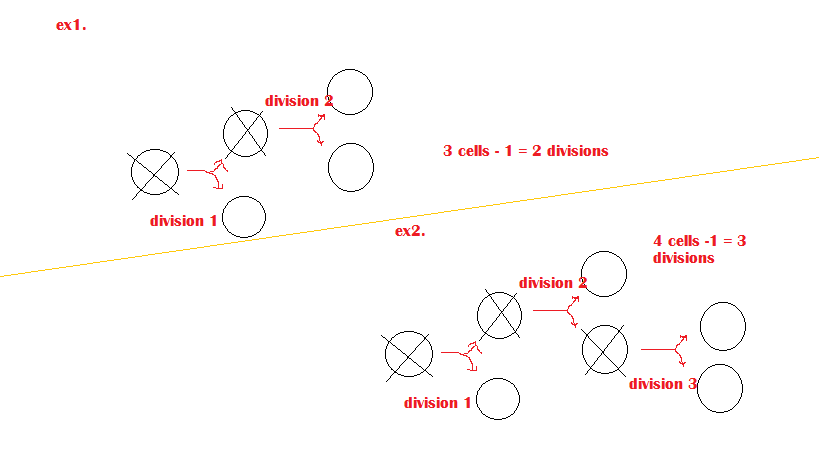 However, we don't count the first cell here because a primary spermatocyte is fundamentally different form a spermatid. So in meiosis, the first cell isn't counted, and four new cells are produced.

In mitosis, we do count the first cell. Note that there are two cells produced form one, so there is only one new cell. Hence we get the formula $x-1$.

Not the answer you're looking for? Browse other questions tagged cell-culture meiosis mitosis or ask your own question.

6
What is the main general difference between Mitosis and Meiosis?
3
Are there verbs for "undergo mitosis" and "undergo meiosis"?
3
Interpreting graph of mitosis and meiosis
5
What's the recommended maximum passage number for mammalian cells (NCI-H441)?
5
How do nuclear membranes form during Telophase of Mitosis/Meiosis?
3
Doesn't meiosis form two pairs of similar cells and two pairs of opposite cells?
0
Why isn't meiosis II called mitosis (as the chromosome number doesn't half)?
1
Is the cell cycle applicable to meiosis as well, or just mitosis?