What is nastic movement due to growth?

I have read in my biology book that

"nastic movement is the movement that occur due to difference in the rate of growth on two opposite sides of a plant organ" ,

Hmm want to visualize. Draw a rainbow. take a measuring tape, and measure the length of the curves. You'll find that the curves from convex, "outer" regions, are longer, and the curves towards concave, "inner" regions are shorter and shorter. Like this.

To test this, you could take 2 paper-strips, of slightly different lengths. Now, stepple their end-portions (so-that no-one lag-behind the other, and whole length of long strip (here 10 cm) interact with whole length of short strip (here 8 cm)). Now if you gently try to stretch the whole thing, you will obtain a bent structure. Longer strip outwards and shorter strip inwards.

We see a similar situation when one side of a masonite-board or a cardboard is wiped with wet cloth, the wet surface soon bent-out, this is plausibly because the wet surface expands.

Now , for continuously growing structure, such as a plant's axis, the all sides grow in almost same speed, if one side grow/expand slightly faster than its opposite side, then faster side will accumulate some more length. Now since all the layers of plant-tissues are tightly attached, no-side will be lagged from the other's but the whole thing will become bent. The "faster" side will try to stay "outer" of the curve, and the "slower" side will try to stay "inner" face of the curve.

A more-similar situation is bi-metallic strip which is made up of 2 layers of separate metals. The 2 metals have difference in their linear thermal expansion coefficients, so, when the strip heated/ cooled, the 2 sides of the strip expands/contracts in separate rate with temperature change; as a result, the strip bents (or if it was already bent, then change its curvature).

Let look an example of a nastic movement

Note that, in this induced-movement (depending on light), there is no relation between direction of light and direction of leaflet movement. From whatever direction you give the light, the leaflets will arouse ~90 degrees from the axis.

In contrast, if there were any effect of direction of the stimulus, it will be called a tropic movement, such as this positive phototropism image from wikipedia. 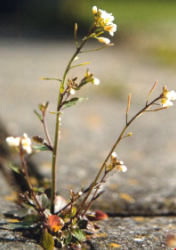 Positive phototropism in Arabidopsis thaliana shoot, photo from wikipedia. (Phototropic movements are most common movement in all green plants and we watch it in germinated seedlings from our kid-hood)

There are autonomous (non-induced) movements, too. Such as in Desmodium gyrans or telegraph-plant, a kind of autonomous turgor movement is seen. 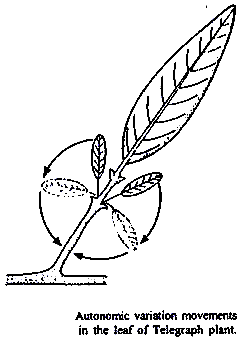 . Photo from http://www.biologydiscussion.com/plants/movement/movement-in-plants-with-diagram/23622 youtube links here and here . (However yet I've not the fortune to see this plant directly) .

This classification scheme of plant movements would give a quite better idea.

And the most examples of Nastic and Pulvinar movements are of turgidity-type.

Nastic movement in Oxalis sp. is also due to turgor-variation; not due to growth-movement.**

Most nastic movements however, are not directional. For example, in Thigmonasty, or the movement due to touch, of the Mimosa pudica (or the touch-me-not), cells at the base of the leaves pump out K+ ions and Cl- ions, while taking in Ca+2 ions, thus create a osmotic gradient and lose water. This loss in water results in a drop in turgor pressure of the leaves and they droop.

Not the answer you're looking for? Browse other questions tagged plant-physiology movement or ask your own question.

31
How do trees manage to grow equally in all directions?
9
What is the effect of a pure-oxygen environment on a plant?
9
What could cause spiral tree growth?
4
Do lunar rhythms have really impact on plant growth?
1
Do all plant hormones of one group show the same qualitative effect with respect to their target pathway(s) and the biological response?
4
Plant growth in blue light
0
Do plants experience the following feelings