Why a striped baby is not the result of a white and a black parent?

The reason that there are no stripes when black and white people get babies is the fact that the number of pigment cells is the same for black and white people. What is different is the amount of pigment produced, and it will be different in the kids as well (lighter than the dark parent, darker than the light parent) See references 1 and 2 for details on the melanocyte density. Skin color is a multigenic trait, so the genetic background of both parents and their effects on pigmentation come into full play here.

Besides this effect, humans do have stripes, although they are mostly not visible. They are called Blaschko's lines and look like below: 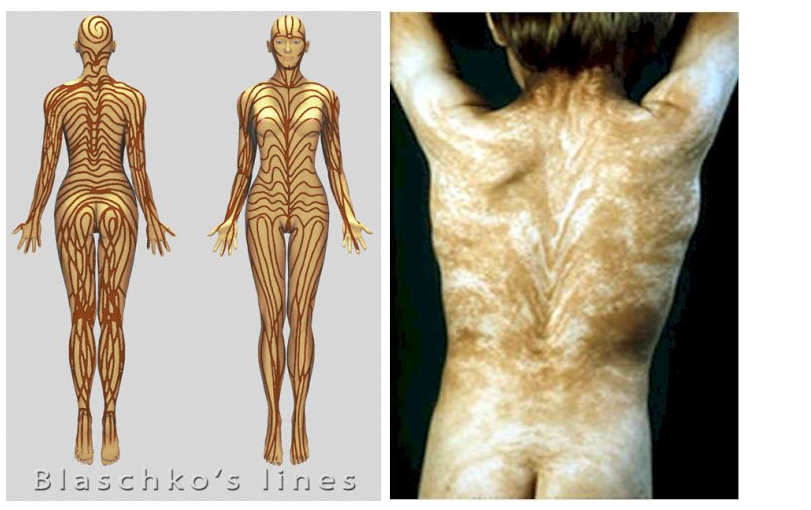 These develop from the migration pattern of the melanocytes (and their precursor cells) in the developing embryo. They can get visible in some rare genetic conditions or by diseases. See reference 3 for a more popular explanation and reference 4 for a review on this field.

Skin colour is determined by additive effects. That is, the amount of pigment is determined additively by the genes. For the basic genetics of it I will give a simple example, which is just illustrative and a gross oversimplification, it's probably much more complex (many loci all acting at once).

Suppose skin colour is affected by a single locus (at one position) within the DNA, which determines the amount of pigment produced. At this locus there are two alleles within a population, that is two versions of the DNA (e.g. ACGTCCATT and GACTTAACT are different DNA sequences). Allele one ($A_1$) produces a small amount of pigment, and allele 2 ($A_2$) produces a large amount. Thus people with $A_1 A_1$ genotype (people are diploid, i.e. they get a version from each parent) have light skin, $A_2 A_2$ genotypes have dark skin, and $A_1 A_2$ have an intermediate skin colour.

This is analogous to mixing fruit juice with water - if you mix blackcurrant cordial with water the colour is determined by the proportions. If you put out two bottles, one with cordial and one with water, allow two people to randomly choose a bottle, and use their choices to mix a glass of drink, 50% of the time you will end up with 1/2 water mixed with 1/2 cordial, while 25% of the time just a glass full of water, and the remaining 25% of the time just a glass full of cordial.

Note: although stripes occur in animals including humans (see chris' answer), it's not I'm the way your question insinuates

The analogy with the glass of cordial is what going on in each cell, for stripes you would have to have organised and alternating clusters of glasses (cells) which get their contents determined by one individuals choice of cordial, with the selector alternating with the cluster of glasses.