What is an isolated beta bridge?

DSSP gives the letter B for a "residue in isolated β-bridge (single pair β-sheet hydrogen bond formation)", according to Wikipedias page for secondary structure (and various other proper sources). Can somebody please explain what this is in some more detail please? If I google it all that comes up is pretty much the same as what wikipedia gives.

We have developed a set of simple and physically motivated criteria for secondary structure, programmed as a pattern-recognition process of hydrogen-bonded and geometrical features extracted from x-ray coordinates. Cooperative secondary structure is recognized as repeats of the elementary hydrogen-bonding patterns “turn” and “bridge.” Repeating turns are “helices,” repeating bridges are “ladders,” connected ladders are “sheets.”

In the DSSP files residues that are in ladders or beta-sheets are designated E, and B is used for instances where there is a single hydrogen bond. The former are very common, wheres the latter are quite rare — some proteins have none. I have prepared an image of an example for residues 74 and 79 (side-chains omitted for clarity) in a loop in the protein 1PPR.pdb (a light-harvesting protein). The other loop residues 75-78 are designated as T (turn) in the DSSP file, whereas residues 73 and 78 have no structure designation. Hence the hydrogen bond between Ser-74 and Val-79 is an isolated singleton and designated B. 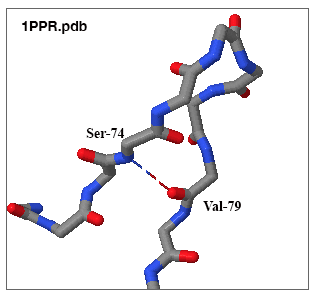 Not the answer you're looking for? Browse other questions tagged proteins protein-structure or ask your own question.

3
Two subunits connected by only one disulfide bridge: quaternary structure?
2
What causes a polypeptide to fold into an Alpha helix over a Beta pleated sheet
8
What is peptide mapping?
3
Prediction of transmembrane beta barrels?
0
Beta Sheets vs Alpha Helix - Strength
2
What is protein secondary structure?
4
Why do large, aromatic residues prefer beta-pleated sheets?