Mass Spectrometry (proteomics): How isotopes can be used to to determine charge of the peaks?

So let's suppose the spectrometer has a sufficient resolution to look at the different isotopes. It's not really clear for me at which peak I have to start. So to summarize my questions realted to this topic: 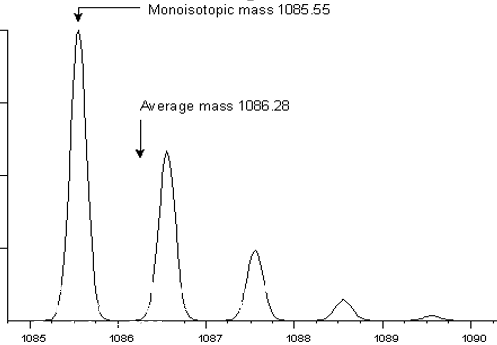 source: http://mascot.proteomix.org/help/mass_accuracy_help.html
When looking at the above graph, there is a difference of 1 amu between the different peaks.

So, if you take the spectra of a compound and you see the isotopic peaks having a distance of 0.5 among each other, you are looking at a doubly charged ion, if the distance is 1, it's a singly charged ion.

What do the isotopes have to do with the charge? Given that the isotopes peaks are around 1 units far from each other, you can conclude that the ion you are looking at has 1 charge.

The last question is not clear to me.

I've changed the order of your questions so that the answers follow from one another.

What do the isotopes have to do with the charge?

The presence of isotopes has no effect on the charge of the molecule. The physiochemical properties of the molecule and how the MS has been setup dictate how molecules acquire charges.

This is important as methods which utilise isotopic labelling rely on the presence of isotopes in molecules having no effect on their physiochemical properties. Secondarily, life would become untenable if the incorporation of isotopes altered the properties of proteins (see below).

Which peak do I have to look at when determining the charge based on the isotope distribution?

The m/z of the isotope peaks provides information about charge so you use the spacing between isotope peaks. It is important to use the most accurate measurements, which will be the strongest peaks, to calculate the mass difference. There is no need to use the monoisotopic (M) peak which in some cases will not be present.

~ 1.1% of the carbon on the planet is C13 so on average in biological molecules 1.1 out of every 100 carbons will be the C13 isotope. Therefore, as biological molecules get larger C13 will be incorporated more frequently and the chances of measuring the monoisotopic peak reduces.

What does this charge (and isotope distribution) tells us about the peak on which we zoomed in to create the above graph?

We know that the mass for the isotope is ~1 so z must equal 1 when the isotope peaks have a difference of 1 m/z.

Why would the peaks differ 0.5 mass units(see above)?

Not the answer you're looking for? Browse other questions tagged proteins mass-spectrometry mass-spec proteomics or ask your own question.