So I have been working on a project for a while, and there is one mechanism that I need a little bit of advice about.

The project is chemical-biology based, so don't be deterred :)

Theoretically, by this point in the experiment:

I put cells (let's say lymphatic or endometrial) into stasis, through means of lyopreservation, and now, I have brought them out of stasis, through exposure to a sucrose (trehalose)-based medium.

Now I am attempting to chemically detect mitotic growth within the cells, how can I do this?

This is where the chemistry comes in: My first thought was to use a chromatic indicator that would fluoresce or irradiate in response to mitotic acceleration, but I have not yet found a suitable chemical. In research, I found that a similar experiment had been done in bacteria, and the chemical dimyristoylphosphatidylcholine (1,2-Dimyristoyl-sn-glycero-3-phosphocholine) had been used. Would this work in mammalian cells? Another idea was to use a chemical that detects the unnatural growth from the spindle fiber and centriole point of view, reacting when the centrioles entered the phase to replicate. I have been unable to find any chemicals that make use of the replication of centrioles, or the spindle fibers, so I need ideas.

To summarize: Does anybody know of any biochromatic indicators that react through detection of rapid, mammalian, mitotic growth? Not necessarily cancerous and uninhibited, but rapid meaning 'a speed of mitosis that is faster than the norm.' Preferrably, the indicator would be able to stay in stasis for extended periods of time.

If such an indicator is not available (or you do not believe so) then does there exist a biochromatic indicator that reacts in the presence of any sort of cell division?

Is there a way to chemically detect cell division?

I am welcome to all ideas. 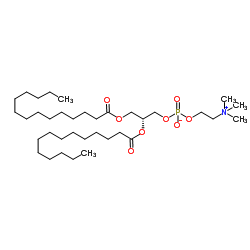 The most common indicator for the growth of any kind of cell (population) I know of is the amount of DNA in that cell. There are a number of (fluorescent) dyes that bind to DNA in a stoichiometric fashion and can therefore be used to determine the (relative) amount of DNA inside a cell (is hope that's what you mean with 'biochromatic indicator'). The most common dye used in this way is probably DAPI.

In order to determine which cells are dividing, you'll obviously need a device that can measure the fluorescence of each cell individually- so either a microscope or a flow cytometer. Because growing mammalian cells (it seems to me that's what you want to look at) multiply their full set of diploid chromosomes in the S-phase of the cell cycle, you can discriminate growing cells from others by their relative DNA amounts:

Figure 1 of this (really old) paper also shows, how DNA amounts can indicate at which point of the cell cycle a cell is (which tells you if its growing) works.

A note on cell viability:

Staining any kind of cell with DAPI (or most other dyes that bind to DNA) will most likely kill it or at least act as a very strong mutagen. Based on your answer to my comment this should not be a problem.

While not really part of your question, you mentioned that you want to preserve cells using lyopreservation, which basically means drying them. You should consider, that mammalian cells will most likely not to survive this process (unlike plants and some invertebrates there are no mechanisms in mammalian cells to protect them against the water loss). Without sorting the live cells from the dead ones first, your measurements may detect cells that were dividing prior to the preservation.

2
Chemical structure prediction
2
Amino acid characteristics that determine their chemical properties?
1
Determination of a chemical compound in a non-homogeneous sample
6
Do lysosomes play any role in cell division?
2
Can emulsion test be used to detect phospholipids?
4
Enzyme kinetics at the chemical level
2
Which modern methods of antibiotic production are there?