Why are there so few multicellular anaerobes?

There are a few documented cases of multicellular anaerobic organisms, but I can't see a reason for it to not be more common. On the contrary, it seems pretty useful to be able to create energy even when deep inside tissues, yet the Loricifera are the only ones I've found documented. Given how often multicellularity has arisen, is there something that's fundamentally difficult about being anaerobic while multicellular?

I'm also drawing a distinction between facultative anaerobes and obligate anaerobes- there are plenty of facultative multicellular anaerobes, and I'm not as curious about that.

Useful sites that I came across while searching:

Anaerobic fungi, presumed to be unicellular?

I did a bit of reading myself, and it seems as if Loricifera are the only multicellular obligate anaerobes.

I see your point with niches for anaerobic organisms in deep water. Many organisms near the hydro-thermal vents use anaerobic cellular respiration. From my understanding of Loricifera, it seems as if they would utilize chemosynthesis as their method of obtaining energy.

Loriciferans are found exclusively in marine habitats, and live in the spaces between sand grains or in the mud at the bottom of the deep sea. The nanaloricids prefer sand with low levels of detritus (material derived from the decomposition of once-living organisms) or clean shell gravel, whereas the pliciloricids are often found in such deep-sea sediments as the white abyssal Globigerina ooze and the red deep-sea clay from the hadal zone (below 20,000 ft; 6,100 m).

Lociferans live in a rather oxygen-less environment.

So you're right about niches in the deep sea.

But typically the deep sea has extremely high levels of pressure that few multicellular organisms are built to handle.

Additionally, I was able to find a few other obligate anaerobic Eukaryotes, but those were Protozoa, so thereby not unicellular.

About it fundamentally being difficult to be exclusively anaerobic while multicellular, with multiple cells, there is more upkeep and more energy is required to run the "system". Aerobic processes tend to be a lot more efficient, producing more ATP for usage. 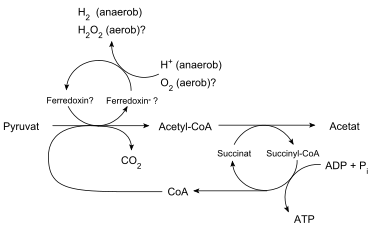 Only 1 ATP (from my understanding) is produced from this, whereas with aerobic respiration:

Much more ATP is produced from aerobic processes.

In the end, the majority of obligatorily aerobic organisms are unicellular, or are extremely small.

So... that's why multicellular organisms are typically carry out aerobic cellular respiration.

Also, about the fungi you mentioned, it goes through Horizontal gene transfer, which unicellular organisms typically use:

So yes, it seems as if the fungi that you mentioned and other similar types of fungi would be strictly unicellular, such as yeast (thought yeast is a facultative anaerobe).

It is well known that anaerobic breakdown of glucose produces 2 molecules of ATP per molecule of glucose. It is also well known (see, for example, here) that fully oxidizing it to carbon dioxide and water (obviously, an oxygen-dependent process) adds up to a net energetic benefit of an additional 36 molecules of ATP. This is a massive difference. In an oxygen rich environment, anaerobes would be vastly outcompeted by aerobes, simply due to the vastly greater energy budget of the latter. As for anaerobic environments, complex (as in multicellular) anaerobes are still not prevalent, not because they are being outcompeted by aerobes, but because complex organs and systems require a lot of energy to maintain an function, energy that anaerobic respiration can't provide. Obviously, the energy requirements increase with an organism's size and complexity - the farther cells are apart, the more energy it takes for a signal to be sent in between them, e.g. via a signal peptide/protein or a hormone through a vascular system that requires energy to function, a nerve impulse, etc. Conversely, unicellular organisms avoid the energetic costs of intercellular signaling altogether (there are a few exceptions here and there, e.g. colony-forming microorganisms, but these expend far less energy on communication than cells in multicellular organisms). Numerous very interesting works on the energetics of cells and organisms are available - see, for example, here, here, and here.

One may point out that glucose, although the predominant source of energy for cellular metabolism, is not the only source, inorganic compounds from thermal vents being the alternatives most often cited. However, these are far less energy dense, with ecosystems centered around them being far less dense and complex than the ones centered on sun light and photosynthesis (Orcutt et al., 2011). Interestingly, even is such deep sea systems, the predominant source of energy is often the organic matter sinking from the photosynthetic ecosystems above.

One must wonder if there was an abundance of multi-cellular anaerobes that existed before the Great Oxygenation Event (2.45Ga), but were never recorded (or discovered yet) in the fossil record.

The wikipedia article also suggests that ancient anerobes, before the Great Oxygenation Event, may have had more nickel to work with: "Modern methanogens require nickel as an enzyme cofactor. As the Earth's crust cooled and the supply of volcanic nickel dwindled, oxygen-producing algae began to out-perform methane producers, and the oxygen percentage of the atmosphere steadily increased.[23] From 2.7 to 2.4 billion years ago, the rate of deposition of nickel declined steadily from a level 400 times today's."

Not the answer you're looking for? Browse other questions tagged cell-biology metabolism anaerobic-respiration or ask your own question.

11
Why are there so many medicinal plants?
5
Database of Multicellular and Unicellular organisms?
5
Why don't animals produce alcohol
8
Are there any multicellular forms of life which exist without consuming other forms of life in some manner?
2
Are there differences in energy of glucose isomers?
4
Are there bacteria that respire anaerobically in aerobic conditions?