Why do red blood cells contain haemoglobin and not myoglobin?

So I am reading about muscles and I come across myoglobin. It has a much higher affinity for oxygen than haemoglobin. So why have animals evolved to have haemoglobin in red blood cells, rather than myoglobin, which would be much more advantageous?

Just to expand slightly on the answer by Jack Aidley:

Have a look at this section from Stryer's Biochemistry text book, particularly Fig 10.17, where you can see that haemoglobin has evolved to have a high affinity for oxygen at the O2 concentrations present in the lungs, but a low affinity at the O2 concentrations present in the peripheral tissues. This is achieved by binding oxygen co-operatively. This means that haemoglobin can release 60-70% of its bound oxygen. Under the same conditions myoglobin, were it be used in red blood cells as an oxygen carrier, would release much less.

Incidentally the Figure linked to shows a comparison between haemoglobin and a hypothetical protein which shows 50% saturation at the same concentration of oxygen but which binds oxygen non-cooperatively (like myoglobin).

A more direct comparison of haemoglobin and myoglobin - found here - is shown below: 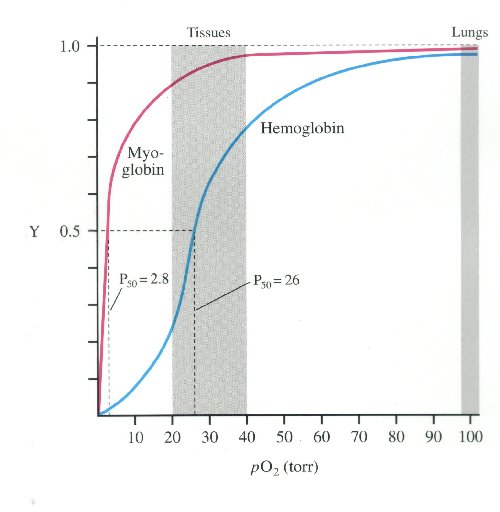 I don't understand some of the statements from shigeta so here are my views - if I am wrong, I would (genuinely) like to be corrected, since I have to teach this stuff.

..."what is particularly useful about Hb's cooperativity is that the last oxygen is harder to pull off the Hb tetramer than the first."

This statement contradicts my understanding of the oxygen-binding behaviour of haemoglobin. In the deoxygenated state the protein is in the conformation known as the T (for tense) state, and this is a low affinity state. The binding of an oxygen molecule to one of the haem groups in one of the globin subunits of the tetramer increases the affinity, so that subsequent binding of oxygen becomes easier. The details of how this happens are still debated, but I think what I have said so far is accepted by everyone.

Here is an equation to represent the binding of the first oxygen molecule to the haemoglobin tetramer:

"The heart, which is the first organ in the blood cycle after the lungs uses a lot of oxygen - if hemoglobin were not cooperative, it might take all the oxygen from hemoglobin just after the beat when it uses oxygen when in distress, creating a block of hemoglobin which is completely without bound oxygen."

According to this review, Regulation of Coronary Blood Flow During Exercise, (I am simplifying a lot here, but this statement does appear in the review and is not taken out of context): "Increased myocardial oxygen demands during exercise are met principally by augmenting coronary blood flow." At rest the heart is already extracting most of the oxygen from its blood supply (see here for some interesting data) so again there is no question of the heart extracting much more - it simply needs more blood, and of course the increased heart rate will contribute to this. There is also scope for directing a greater proportion of heart output through the coronary circulation, but I have been unable to find any quantitative statements about that. Interestingly, if you take a look at the data in the 1st table of the data here you will see that, at rest, 22% of the heart's output goes into the renal circulation, but that much less oxygen is extracted from that blood (about one ninth of how much is extracted from the blood going through the cardiac circulation). This represents a source of potential increased blood to be diverted to the heart at the expense of a reduction in renal filtration.

"Also - Hemoglobin is pretty clearly an evolutionary adaptation where four myoglobins came together to form a cooperative oxygen binder, so at one time probably myoglobin was the oxygen carrier. There are some primitive animals which have no distinct hemoglobin, just myoglobin like carriers."

I agree it is clear that haemoglobin and myoglobin evolved from a monomeric myoglobin-like ancestor, and that the appearance of a tetrameric molecule created the potential for co-operative oxygen binding. I am not as convinced by the rest of the sentence. I think we have to agree first on what we mean by an oxygen carrier. What I mean is a protein that is a component of a circulatory system. I know of no evidence that a myoglobin like molecule could perform this function. This arises directly from the shape of a simple binding curve (a rectangular hyperbola). For the protein to be saturable at atmospheric oxygen concentrations it has to have a certain Kd, and this precludes significant release of oxygen at physiologically useful concentrations. You either have a protein which can unload effectively but will not ever become saturated with oxygen, or you have a molecule that is able to become saturated but cannot ever unload except at every low oxygen concentrations. That is the remarkable thing about haemoglobin - the appearance of cooperative binding allowed for a more switch-like interconversion between a high affinity state, for loading up, and a low-affinity state, for unloading.

Now, if you wish to include intracellular oxygen transport in your definition of "carrier" then we enter a whole other debate about the role of myoglobin, but I have gone on for far too long already, so I'll stop there.

Just wanted to supplement to the other two answers... I was trying to use comments but ran out of space.

@AlanBoyd s figure tells you a lot - you can see that myoglobin (Mb) has a much higher affinity for oxygen, so it will sit in the muscle and take the oxygen the tissue needs from the hemoglobin (Hb) as the blood flows through the tissue.

But what is particularly useful about Hb's cooperativity is that the last oxygen is harder to pull off the Hb tetramer than the first. As a result, Hb will tend to hold onto some oxygen as it flows through the body, retaining some of its oxygen on each Hb molecule until later in the oxygenation cycle. This keeps the oxygen concentration in the blood consistent. The heart, which is the first organ in the blood cycle after the lungs uses a lot of oxygen - if hemoglobin were not cooperative, it might take all the oxygen from hemoglobin just after the beat when it uses oxygen when in distress, creating a block of hemoglobin which is completely without bound oxygen. As this lot of hemoglobin circulates into the capillaries, you could get some parts of the body with no oxygen at all.

Also - Hemoglobin is pretty clearly an evolutionary adaptation where four myoglobins came together to form a cooperative oxygen binder, so at one time probably myoglobin was the oxygen carrier. There are some primitive animals which have no distinct hemoglobin, just myoglobin like carriers. Also some hemoglobins are not tetrameric, but with many subunits, so the cooperativity curves have sometimes been tuned by evolution for different organisms.

Figure above: "Rendering of Hb tetramer and monomeric Mb. Hb is composed of four subunits, two α-subunits and two β-subunits, each highly homologous to Mb" ( from figure in reference )

Blood needs to be able to lose oxygen as well as capture it, the whole point is to take in oxygen in the lungs and then release it throughout the body. Blood that is simply really good at absorbing oxygen would only be an oxygen trap. Myoglobin, having more affinity for oxygen, can take oxygen from hemoglobin and store it in the muscle for the near future use.

Not the answer you're looking for? Browse other questions tagged cell-biology cellular-respiration or ask your own question.

16
Why is a lack of oxygen fatal to cells?
3
Why are embryonic germ cells considered stem cells?
29
Why do we need red blood cells?
2
How does the drug MBC effect the depolymerization of microtubules in eukaryotic cells?
3
Pharmacological inhibition of Ras
6
What do white blood cells do with FOREIGN white blood cells?
8
Is there a purpose for nucleated red blood cells in reptile, avian and fish blood?
2
Osmosis in red blood cells and bacteria
1
Why do many cells together survive better than one cell alone?
1
Does ATP production increase with oxygen availability?