Why when measuring turbidity do we use the minimum wavelength? 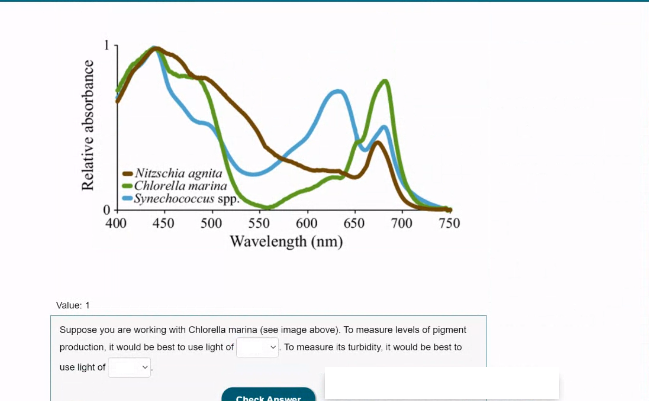 As a preface, I read a few other related posts and was able to gather some knowledge, though without any background in physics I am having some trouble here piecing together a coherent view. I looked up videos of Beer-Lambert law on Khan academy and it gave a relationship between transmittance and absorbance as

Further, this post points out that turbidity is absorbance, and describes to be in relation to diffuse-reflected and scattered light?

Taking a step back, we see okay, turbidity is really just a measure of 'murkiness' and the amount of light that is scattered as a consequence. What about this diffuse-reflected light? And then this post says scattering is really just the sum of refraction and reflection. I don't think that is correct though, as this video shows refraction and reflection and scattering are different concepts, in so much as refraction is the bending of light as it passes through one medium to another, reflection occurs when light hits a smooth or shiny surface and bounces off, and scattering happens when the surface is rough sending the light in different directions. Then this post here. appears to detail out what would be a satisfying explanation but I haven't taken physics. Are there any good videos that might help better explain these topics?

Then, thinking about absorption my chemistry textbook talks about radiation and I had this concept in my head about light being absorbed then admitted at different wavelengths and I feel like that is true and perhaps that is where we are getting the relationship between transmittance and absorbance?

Bringing it back to the question that brought all this up, through other questions we were able to determine the answers to be To measure levels of pigment production it would be best to use the light of 450 nm, and to measure it turbidity would be best to use the light of 560 nm. In other words, for pigment production, we use the maximum value of absorbance and for turbidity the minimum value. The question we have is why this is the case? The most we were able to come up with is that the color of the Chlorella bacteria is green and that things are green because that wavelength of light is reflected, and that the wavelength of green light is 560 nm. I guess we can't use green light to measure the amount of green pigment because the light that would be returned would be a combination of reflected light (how much green pigment) + scattered light(not green pigment but returns green light) + (some combination of absorbed and reradiated light??). So we wouldn't be isolating the information we are after? If we want to know how much "green" is present this would be best measured by measuring the wavelength of light that is the least reflected, or the most absorbed, so the green pigment absorbs most of this light and the light that is not absorbed will tell of how much green stuff was there to absorb it. When it comes to the why for turbidity I am a tad stuck and I think it is because we appear to have a mixture of definitions above. Perhaps some more concise definitions will shed light. It appears the answer to "why can't we use green light" may help to give a possible answer, as the scattered light is the measure of turbidity and that would be with some margin of error, what we have isolated?

Usually when measuring materials in a spectrophotometer we want to use the absorption maxima to minimize the signal-to-noise ratio, that's why for pigment measurement you'll use the maximum point. But when you measure two materials you want to take two measurements with as little correlation as possible, that is to avoid one material influencing your measurements of the other.

Imagine you are trying to breed C. marina for more pigment. Obviously more algae = more pigment so you want to measure how much algae you have and normalize by it. If you'd measure alga density in a wavelength correlated with chlorophyll content you'll get inaccurate results.

I think the question is ill-worded. You should measure at the pigment's absorption minima and not at the alga absorption minima. As the alga can have other peaks unrelated to chlorophyll. When doing this you should remember that chlorophyll and many other pigments are insoluble in water but your measurements of live cells are, usually, in water media.

The best in my opinion and that is the method I'm currently using is to build your own curve by counting cells in some manner (like hemacytometer) and measuring the full spectrum (Your graph stops at 750nm, I got up to 1000nm).

4
How do absorbance readings indicate diauxic growth of bacteria?
0
Cells scatter light in solution. Do they refract?

4
What causes a selective shift of colour perception after removing wavelength filtered glasses?
6
What does "chlorophyll photosynthesis peak" mean in relation to photon wavelength?
16
Why do dog's eyes glow green on a photo?
13
Can "red" cone cells actually see much red light?
17
Are two colors (red + blue) necessary for LED grow lights, or would either color be sufficient?
5
Why do most plants reflect green and others other colors?
0
Would green light look different if blue and red cones were deactivated
5
How many photons does a GFP molecule absorb per second?