Antibodies are proteins which recognize antigens. Exactly which antigen they will recognize depends on the exact sequence of the antibody. This sequence is generated by chance, but it is generated by recombining an array of pre-existing sequences: This means that not every conceivable antibody sequence can be generated by the immune system. Moreover, it is also possible that no antibody at all can be generated for a given substance. So, no, it is not guaranteed that you will be able to generate antibodies for every possible substance. In fact, companies which sell monoclonal antibodies for Western blots often find the occasional substance which will not generate antibodies from their animals (rabbits, mice, goats, and so on).

A second complication is that many molecules are very weakly immunogenic and rely on adjuvants.

Lastly, there is a simple counter example to your question: There are many foreign molecules, both LPS and peptide, produced by bacteria which do not trigger the immune system at all. This applies to all the species that make up our gut flora, since it would counter productive for the body to attack its own symbiotes.

Of course, the immune cells at some stage learn which molecules are "own" molecules, so that they do not attack their own body. If the "foreign" molecule is presented to them at that learning stage, they will not recognize it as an antigen in the future.

Something is antigenic because it acts as an antigen - it binds to an antigen receptor in the immune system (antibody, B-cell receptor, T-cell receptor, etc.). While the concept of "foreign" in immunology is often (incorrectly) equated with antigen, that is not the case. For example, there are many chemicals one could think of that are foreign (non-self), but don't usually raise immune responses - nylon, for example.

The difference between an antigenic and non-antigenic peptide is that the antigenic peptide, when presented in the correct circumstances, can raise an immune response. This means that, theoretically, the exact same peptide sequence can be both antigenic and non-antigenic depending on the environment - whether it's being presented in an immune-suppressed environment, for example. However, it's more common to classify antigenic potential based on whether it's possible for the substance to raise a response in an otherwise "normal" immune environment.

In principle every molecule above a certain size (single amino acids for example can not) can be immunogenic. A very important function of the immune system is to differentiate between molecules, which are foreign and which should raise an immune response and those, which are not and which therefore have to be tolerated. If this differentiation doesn't work, this lead to autoimmunic diseases.

There are two processes which are important here: self-tolerance and tolerance against foreign (or peripheral) antigens. Basically said for self-tolerance autoreactive lymphocites (B- and T-cells) are eliminated from the pool of developing cells, before they can fully differentiate. Only 1-2% of the cells which start developing go get through this selection process. Peripheral antigens (for example from food) are usually tolerated when there is not other immunologic process in the peripheral lymphoid tissues.

The process looks in principle like this (image taken from the second review listed below): 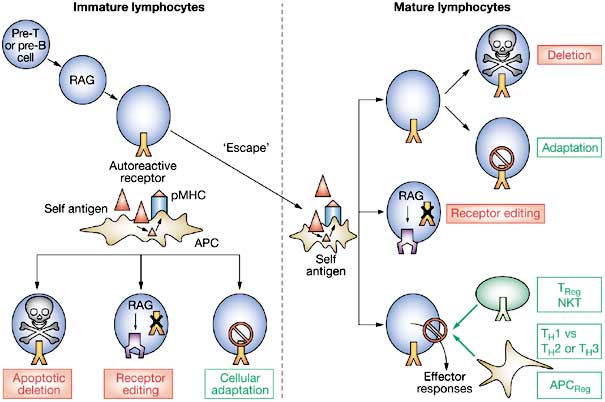 I will not write the whole process here, but the Wikipedia article on this topic is a good start. What I can also recommend is the Immunology book written by Janeway and colleagues (if you can get it via a library) and you can have a look on this two reviews:

If you have problems accessing the articles, let me know.

14
Organ cloning - possible to make a non-antigenic organ?
3
Difference between viral and human genetic material
3
Thymus and maternal microchimerism
7
MHC restricted peptide
5
Specificity of the immune system
7
What is cross-immunoreactivity, and how does it impact vaccine development?
3
What is “non-immune immunoglobulin”?
0
Trade-offs between phage and yeast displays?