What's the frequency resolution of the human ear?

I was thinking about audio compression (namely mp3), that "filters" out sound that we would not likely hear.

I've also checked the wiki entry for auditory masking, and found this:

If two sounds of two different frequencies are played at the same time, two separate sounds can often be heard rather than a combination tone. The ability to hear frequencies separately is known as frequency resolution or frequency selectivity. When signals are perceived as a combination tone, they are said to reside in the same critical bandwidth.

My question is how much is this critical bandwidth or what's the smallest frequency difference we can perceive as two different tones, if you wish. Let's assume that both tones are equally loud, are coming from the same direction and distance and we are in a quiet room - so basically we eliminate as much noise and affecting phenomenons as possible.

As @ sanchises pointed out (thank you again!) in the comment section the frequency resolution is 3.6Hz between 1 and 2kHz. But since perception threshold is a function of the pitch of the sound I'd assume that the ability to resolve two tones would change with pitch too. Does anybody have any data on that? For example resolution X pitch graph.

The frequency limen, or frequency resolution can be determined in various ways using psychophysical measures. You refer to a simultaneous method, in which two (or more) frequencies are presented at the same time. This has consequences for the test as different frequencies are perceived with different perceived loudness under constant sound pressure levels, meaning that additional cues are present besides pitch cues.

One carefully controlled study Zwicker et al (1957) in this regard defined the critical band basically as "those frequencies where no intensity summation occurs", meaning that adding those frequencies (below or above the center frequency) do not result in differences in loudness perception (as expressed in acoustic threshold of the center frequency). This method nicely prevents loudness summation cues by deploying them in the criterion. This article shows the following picture (after Zwicker et al. (1957)): 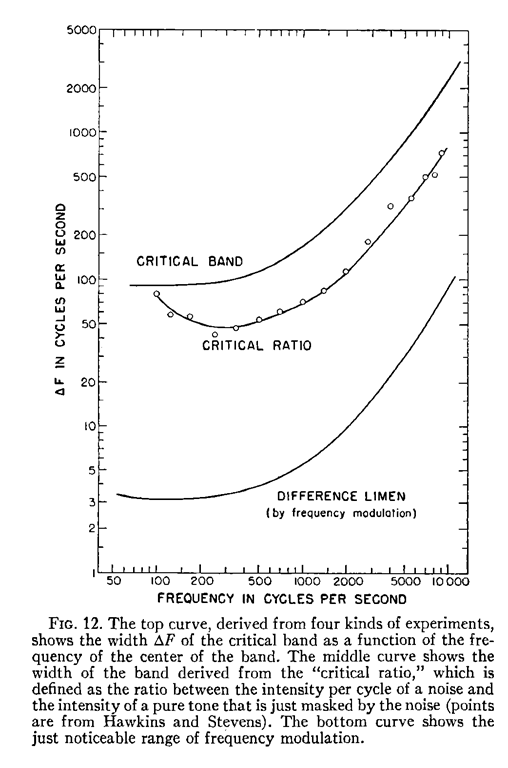 The critical band (upper graph) is dependent on frequency, and ranges from 0.1 kHz to >2 kHz.

The markedly lower difference limen of 3.6 Hz as touched upon in the comments may have been obtained using an alternative psychophysical test where the test frequency is modulated by another frequency (bottom graph). This procedure is based on adding a frequency to a certain sinusoidal stimulus, basically resulting in a single stimulus instead of two (or more). This procedure is technically not defined as a critical band and indeed results in a difference limen of ~3.5 hz and up. The other graph plotted in the figure is a masking procedure (middle plot), which basically determines the physiological overlap between frequencies in the cochlea in the intensity domain by determining the amount of masking from one frequency by another.

NB: The authors worked with headphones so no effects of direction.

I think you have already gotten ur question answered. The human auditory system has the resolution of 640 different frequencies, so dividing the hearing frequency range by this you could see the smallest frequency. although the bandwidth is not constant in the whole range (100 for frequencies below 500 Hz and 0.2f for frequencies above 500 Hz). Also, the auditory system of ours has a dynamic resolution of less than 1 dB. hope I got it right :)

Not the answer you're looking for? Browse other questions tagged sensation perception hearing or ask your own question.

5
What is the biological limit on hearing resolution?
4
What are the lower and upper hearing limits of the human ear?

9
Does the human ear adapt to noise levels?
14
What is the human ear's temporal resolution?
5
What is the biological limit on hearing resolution?
5
Are our ears more sensitive to low or high pitched sounds?
3
How much does hearing deteriorate with age?
4
In what range do humans generally interpret sound best?
3
Is the masking effect of sound related to action potentials or to mechanical aspects of hearing?
2
Volley theory and sound amplitude/power
6
Are there gaps in what our ears can hear?