When glucose production is low, the brain begins using ketoacids as energy... how does that work?

Can someone very generally describe how the brain consumes ketoacids/ketone bodies when blood glucose has been completely depleted?

Human body is a glucose driven machine which intake carbohydrates and converts to glucose. Energy is yielded from the glucose and glucose is stored as glycogen. When the carbohydrate intake is somehow reduced then body will shift its mechanism and uses the fatty acids to produce energy. Liver synthesis ketones from fatty acids in our diet or from body fat. Ketones(acetoacetate and acetone) are released into the blood, which is absorbed by the brain and synthesis energy from it through their mitochondria.

The brain gets a portion of its energy from ketone bodies when glucose is less available (e.g., during fasting, strenuous exercise, low carbohydrate, ketogenic diet and in neonates). In the event of low blood glucose, most other tissues have additional energy sources besides ketone bodies (such as fatty acids), but the brain has an obligatory requirement for some glucose. After the diet has been changed to lower blood glucose for 3 days, the brain gets 25% of its energy from ketone bodies.After about 4 days, this goes up to 70% (during the initial stages the brain does not burn ketones, since they are an important substrate for lipid synthesis in the brain). Furthermore, ketones produced from omega-3 fatty acids may reduce cognitive deterioration in old age. Reference

When the body starts using the fatty acids for energy production, one problem arises in the brain and that is the blood-brain barrier( barrier that separates the circulating blood from the brain extracellular fluid in the central nervous system )Brain cannot use long chain fatty acids because they cannot cross the blood-brain barrier due to their bondage with albumin. As ketones are medium chain fatty acids which can effectively cross the barrier. So brain uses the ketones for energy production by a process called as ketosis. The ketone bodies are then incorporated into acetyl-CoA and used in the citric acid cycle.

The citric acid cycle – also known as the tricarboxylic acid (TCA) cycle or the Krebs cycle – is a series of chemical reactions used by all aerobic organisms to generate energy through the oxidation of acetate derived from carbohydrates, fats and proteins into carbon dioxide and chemical energy in the form of adenosine triphosphate (ATP). Reference 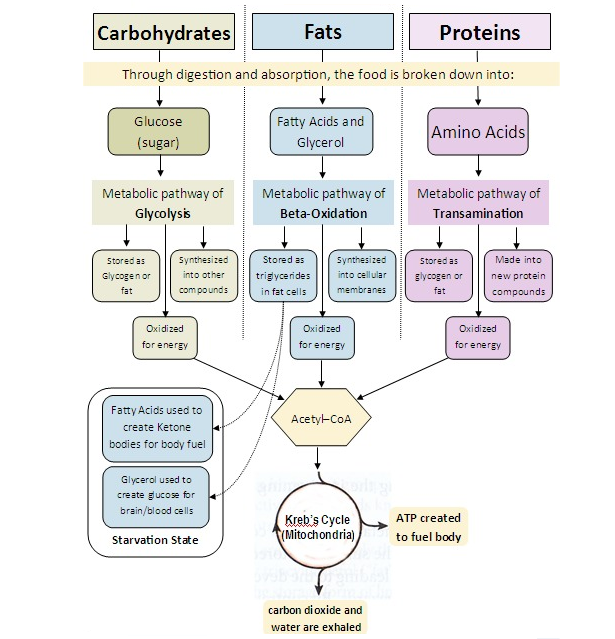 Actually there is fatty acid transport through the BBB. Maybe the rate of this transport is not enough, I don't know, I think it does not really matter.

What really happens here, that the liver prepares the fatty acids, so the brain can use them more easily in the form of ketoacids to produce energy. 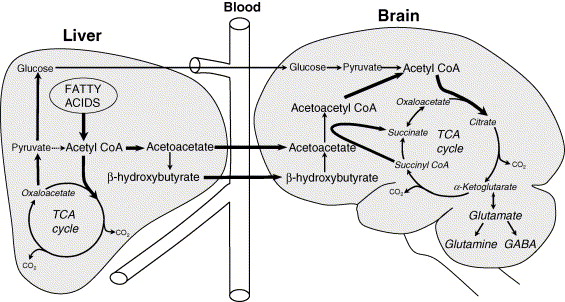 Not the answer you're looking for? Browse other questions tagged physiology brain metabolism endocrinology glucose or ask your own question.

17
Why can't the brain and red blood cells use fuels other than glucose?
8
Does the brain and the body use the same energy source (glucose/ATP)?
3
Is anaerobic activity during ketosis possible?
18
Why is the brain dependent on glucose?
4
What are the differences between how glucagon and cortisol work to increase blood sugar?
2
How does the pancreatic beta-cell know how much insulin to secrete in response to glucose?
3
Specific Neurons that Require Glucose
1
How important is getting enough glucose for maximal brain performance / cognition?
2
How does exercising/starved muscle import glucose (released by liver)?
1
How much oxygen does a brain consume?