What would be the impact of depositing limestone in the oceans (to reverse acidification) on ocean life forms and biodiversity?

This question asked: What is the evidence it is feasible to reverse ocean acidification by adding large quantities of a base (bicarb soda)?

Danny Harvey of the University of Toronto has already looked into this. His solution is to deposit 4 Gt/yr of limestone into the oceans. To put this in perspective, global coal production in 2013 was nearly double this at 7.823 Gt and it is more than global iron ore production in 2014 of 3.22 Gt.

The respondent then posed the question: What impact would such a huge annual deposition of limestone have of ocean life forms and biodiversity?

My question is: What would be the impact of depositing limestone in the oceans (to reverse acidification) on ocean life forms and biodiversity?

To simplify, acidification of oceans is due to excess anthropogenic carbon dioxide CO2:

Seawater is naturally saturated with another base, carbonate ion (CO32-) that acts like an "antacid" to neutralize the H+, forming more bicarbonate.

You want to alkalinize the ocean by dumping CaCO3. That sounds pretty good, and not only would it add more buffer (and decrease acidification) but it would also help the sea creatures which use dissolved Ca2+ and CO32- to make shells of calcium carbonate CaCO3. (The other effect of excess CO2 is the leaching of CaCO3 from shells and corals or other marine organisms:

The limestone mined today is used for gravel, in concrete, road surfacing, foundation support beneath weight-bearing structures, the boulder faces of earthen dams, Portland cement (N.B. the burning of limestone in the cement-making process liberates CO2 gas), Aglime (pulverized limestone) and quicklime (process liberates CO2 gas) which are both soil stabilizers, hydrated lime used to filter potable water supplies and to treat solid and liquid waste and in processing petroleum. These are only the major uses of limestone.

The average annual limestone production in Missouri (the largest deposit of limestone in the world) is about 89 million short tons/year. The cement industry alone is a MAJOR producer of CO2. Producing a ton of cement requires 4.7 million BTU of energy (some of which will release CO2), equivalent to about 400 pounds of coal, and generates nearly a ton of CO2.

So, in addition to the CO2 produced by the use of limestone in everyday life, you want to mine it and dump it into the sea. Unfortunately, even finely ground limestone (remember all that CO2 it takes to mine and crush it) is poorly soluble in water (pH 7.0). It does increase with acid, but still is very slow. Also, it sinks. The worst acidification of the ocean is in surface waters. 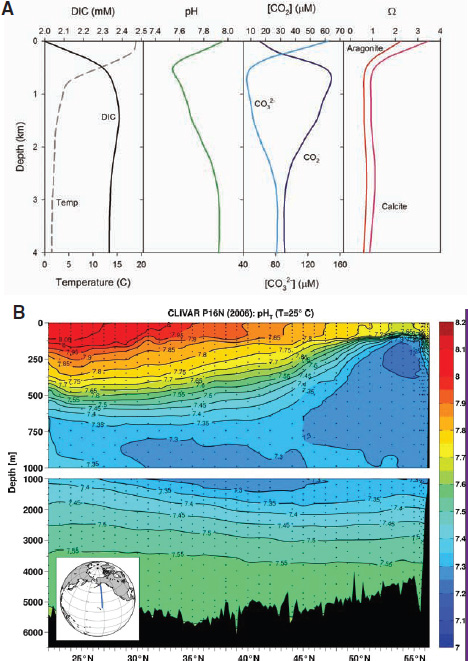 Some estimates suggest that close to 100 million tons of limestone are mined globally each year. (It's probably much more than that; see Missouri alone.) You want to mine, crush (to between 40µm - 10µm!!), and deliver an additional 4 Gt/yr of limestone, even though in the paper you cite, that amount per year would not help:

Why? What difference would knowing the effect on biodiversity be when just procuring, processing and delivering the stuff would generate more CO2 than it could possibly buffer, and would have a minimal effect anyway?

20
Do marine deep sea life forms exhibit circadian rhythms? If so, what entrains them?
20
How and why did mammals go back to the oceans?
3
Why is flash light harmful to what aquatic life forms?
3
What forms the base of the coral reef ecosystem?
12
What is the non-local impact of a large-scale destruction of coral reefs?
0
What are the negative consequences of a narrowed biodiversity to the planet?
1
Is life in the open ocean homogenously spread?