Why do I see different hues of colors between each of my eyes?

Frequently, I see colors with a slightly different hue when looking through my eyes individually. The right eye is more red-tinted ('warmer' hued) and the left is typically more blue-tinted ('cooler' hued). However, sometimes I can't notice any difference in hue between the eyes (even when closing the other) and on a very rare occasion the warm/cool differentiation is switched (left is warm hued, right is cool hued). Numerous others have confirmed they've experienced similar patterns.

Active Oldest Votes
10
$\begingroup$
Want to improve this post? Add citations from reputable sources by editing the post. Posts with unsourced content may be edited or deleted.

This is an interesting phenomenon which I have been aware of for several years, but I haven't yet come across any official description of it or explanation for it.

Nonetheless, the phenomenon is easy to explain. It is a result of light adaptation in your retina responding to different levels of light being received by each eye.

The level of ambient light present over the course of the day varies by as much as 10 orders of magnitude, and our visual systems have evolved to account for this. The human retina and later visual processing centers have a number of ways to adapt to the light level present in the environment. They are constantly doing this, but these adaptation mechanisms take a little bit of time to adjust to a different light level, usually on the order of fifteen seconds to a few minutes. This is why when you step out of a dark room into the sunshine, you are momentarily blinded by the (relatively) bright light.

Some of these adaptation mechanisms are color-specific, such as those that occur in the cone cells themselves.

Most of the time, both of your eyes experience roughly the same levels of light intensity, both in general and for each color of light. But this is not always the case.

If you have one eye covered for a period of time, such as when you've been laying down, then your two eyes will be adapted to two different sources of light. If you then uncover that eye, then for a short period of time that eye will perceive the world to be brighter than the other eye. If the light level present in the environment has a tint to it as well, then the just-uncovered eye will perceive that tint more strongly than the other eye.

You can verify this yourself, like I have been doing over the past hour, with nothing more than a makeshift eyepatch and nothing better to do.

If my hypothesis and explanation is correct, the previously-covered eye should see the world as slightly brighter and more strongly tinted than the uncovered eye does (the hue of this tint should depend on your light source).

If you guys actually do this, you should report your results in the comments, especially if your results demonstrate a flaw with my hypothesis. Let's do some science, people.

Your crystalline lenses are different colors. You are developing cataracts.

I have noticed this too. I assumed it was early cataract in the yellow eye and this is the opportunity to do the back reading. A cataract is the lens of the eye which has yellowed and to some degree opacified with age. 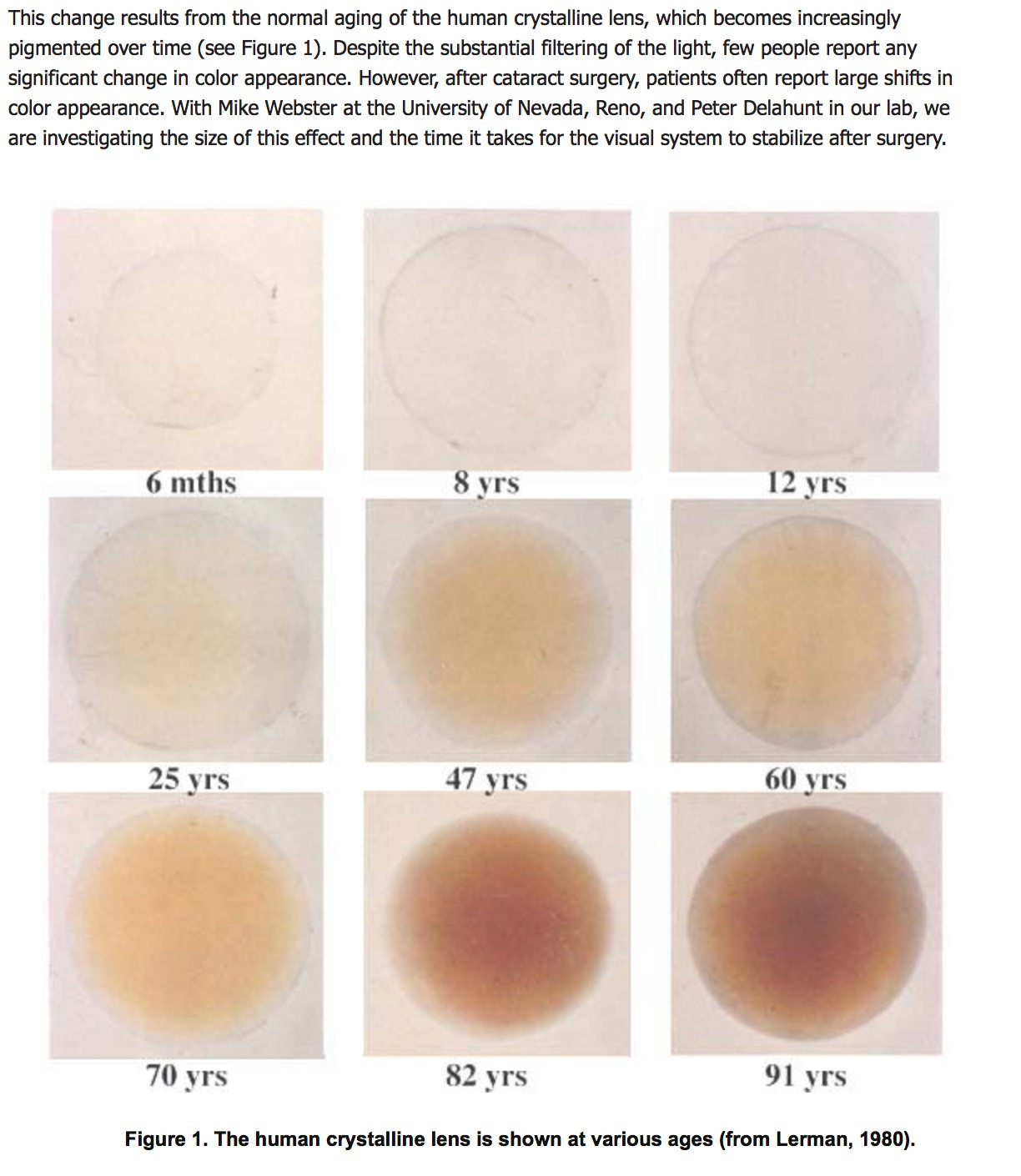 Changes occur slowly and so unless you compare one side to the other you don't perceive everything is getting yellower. But after cataract surgery everything is much bluer. The squares in the image below show regular white light and then how yellow it appears through a cataract. Same source. 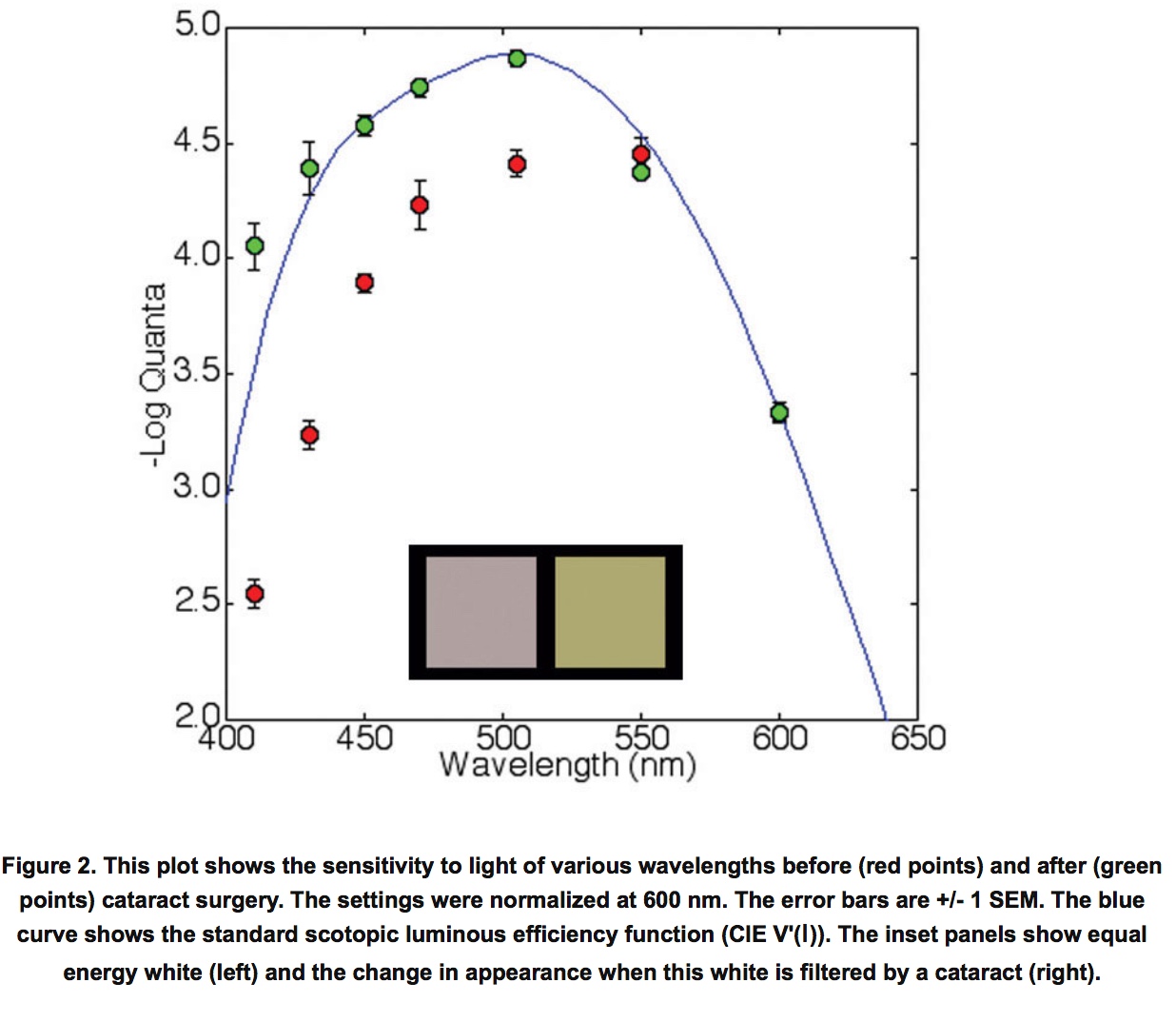 I assume your red tinted eye is the cataract eye. But do not be worried. Cataract surgery is not a big deal.

I do not have an explanation for the switching back and forth / normalization.

While cataracts is a possible explanation, the much more likely explanation is this answer about light adaptation.

There's a significant amount of literature about perceptional hue shifts with varying adaptation to brightness. While these experiments were not done with monocular variants, it's reasonable to believe that the effects measured can affect eyes individually.

Specific-hue threshold as a function of absolute rod threshold was measured with long-, middle-, and short-wavelength monochromatic test lights presented 17 deg extrafoveally. The measurements were obtained both during the rod phase of long-term dark adaptation and under conditions where the rod receptor system was gradually light adapted from a dark-adapted state by a scotopic background field of increasing retinal illumination. The results show that change in specific-hue threshold with change in absolute rod threshold is not, in general, identical for light and dark adaptation of the rod receptor system.

Additionally, the Purkinje effect can also contribute to shifts in the hues observed when the eyes are differentially adapted to brightness. This effect has also been shown in Wolfe et al. 2015 to affect monocular vision, further supporting the hypothesis that perceptional hue shifts can be caused by light adaptation.

Not the answer you're looking for? Browse other questions tagged physiology vision eyes human-eye or ask your own question.

8
What causes the colors we see in eyes?
6
Why don't myopic people see the world upside-down?
2
Why do eyes water in response to particular emotions?
9
Why does my eyes see a red spot when over exposed to light?
7
Why can't we half-close our eyes?
4
Why do we see a different color when we mix two colors?
0
Why do left and right eyes can require different power of lenses?