Glycolysis and fermentation are two separate processes. Glycolysis was explained briefly to give the reader an idea of the events leading up to fermentation and the starting conditions in terms of molecules available for reaction.....Going into the fermentation, the molecules NADH and pyruvic acid are present. " <--- so glycolysis is preceding fermentation, not part of fermentation.

Whereas these two links put glycolysis as part of fermentation, not a preceding stage before fermentation.

"Fermentation and cellular respiration begin the same way, with glycolysis" <-- glycolysis is part of fermentation, not preceding it.

Wikipedia speaks in a contrary way..

"Before fermentation takes place, one glucose molecule is broken down into two pyruvate molecules. This is known as glycolysis." <-- so glycolysis is preceding fermentation, not part of it.

so the above quote from wikipedia suggests that glycolysis is not the beginning part of fermentation, but a step preceding it

whereas still on the fermentation wikipedia page, it says

"Fermentation is a metabolic process that converts sugar to acids, gases, or alcohol....The first step, glycolysis" <-- so glycolysis is part of fermentation.

As @bpedit indicates in his comment, this is a semantic question — i.e. one regarding the meaning and usage of words. I will explain how I and others use these words and why. If you are convinced by my logic you will wish to use them in the same way, if not you are free to use them differently. However there is no ‘universal truth’ here, and if you are student I have no idea what your instructor thinks.

The problem is that ‘fermentation’ and ‘ferment’ (both as a noun and a verb) are old words, predating any understanding of the processes involved. Thus the Oxford English Dictionary quotes a relevant early example of the use of ‘ferment’ as a verb as follows:

1663 Cowley Verses, to Royal Society iv, All their juyce did .. Ferment into a .. refreshing Wine.

From this, it is clear that the idea of the fermentation process is the conversion of some initial compound (the sugar in the ‘juyce’) to some final compound (the alcohol in the wine). This usage is still current in referring to the process of fermentation, for example a Google search brings up a BBC Science educational page which states:

Beer and wine are alcoholic drinks made by fermentation reactions that use yeast to convert sugars into ethanol.

You may or may not be aware that term ‘ferment’ was historically used to mean what we now term yeast, and ‘Zwischenferment’, the obsolete German term for certain enzymes in yeast, is derived from this. So the original concept was merely of some biological conversion effected by yeast, although this has later been extended to bacteria and the idea changed to indicate metabolic processes capable of generating ATP anaerobically.

The extent to which one can tie oneself in knots with trying to define fermentation is illustrated in the best-selling and well-respected text book, originally written by Lubert Streyer and subsequently maintained by Berg et al. I mention this text both because an older edition is available on-line, and because a book of such value to the publishers is carefully vetted by referees. In the chapter on Glycolysis there is an attempt to define Fermentation:

Fermentation: An ATP-generating process in which organic compounds act as both donors and acceptors of electrons. Fermentation can take place in the absence of O2. Discovered by Louis Pasteur, who described fermentation as “la vie sans l’air” (“life without air”).

So the biochemical lawyers have produced a definition that very few readers will be able to take in at first sight. What is this business about electron donors and acceptors? Well what it means in relation to the fermentation process in which lactic acid is produced (note my legalistic choice of words) is that one organic compound is reduced (glyceraldehyde 3-phosphate) — by NAD+ — and one organic compound is oxidized (pyruvate) — by NADH. And as the production of ATP is included in the definition this means that Berg et al. include glycolysis in this definition of fermentation.

…except that on the same page there is the following statement:

So here it seems that the word is being used for the conversion of pyruvate to lactate or ethanol, i.e. it excludes glycolysis.

Pasteur managed to talk about fermentation without being aware of glycolysis or ATP, and it is clear to me that you can write whatever carefully phrased definitions you like, but people are going to continue to use venerable terms like fermentation in whatever way seems natual to them.

And have now included it in this post below 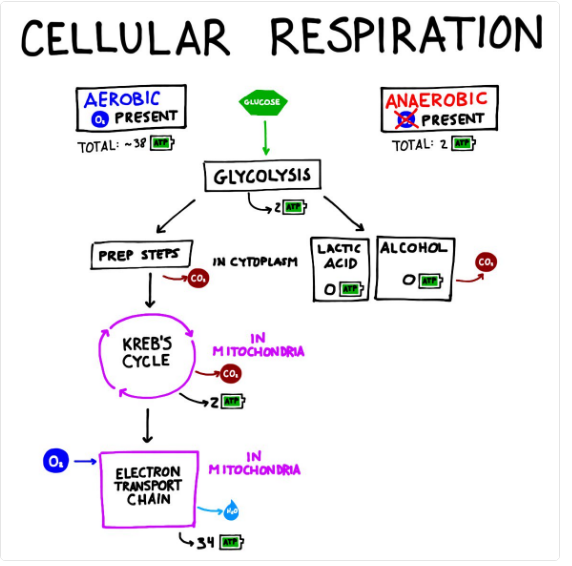 I also made a series of videos for my students that might be useful as well. They're on Youtube: Below is a video on cellular respiration that goes into more detail.

I will post an answer that uses an advanced microbiology book, as they are careful to get their terms very accurate.

Glycolysis is part of both respiration and fermentation. 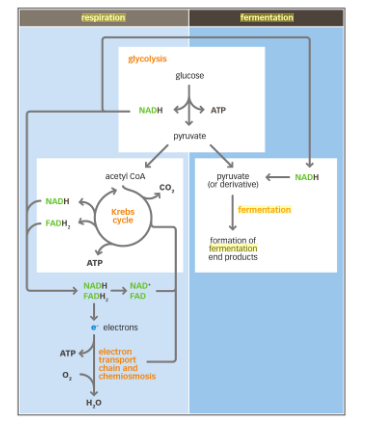 (Side note- Non-introductory microbiology books don't count fermentation as part of respiration. As I discovered when looking into whether humans did anaerobic respiration, here Are humans capable of both anaerobic respiration, and lactic acid fermentation? And as is shown in the diagram above, from that advanced microbiology text. Biology 101 texts, and human biology texts, are more relaxed(arguably wrong), with their definition)

Not the answer you're looking for? Browse other questions tagged cellular-respiration fermentation or ask your own question.

10
Are humans capable of both anaerobic respiration, and lactic acid fermentation?
8
Do acetic acid bacteria use the electron transport chain when converting ethanol to acetic acid?
2
Does Glycolysis produce lactate, or pyruvate?