How is DNA testing used to differentiate between different species?

How is DNA testing used to determine that specimens belong to different species, rather than being subspecies, or members of the same species? Usually the definition of species is about the ability to produce fertile offspring under natural conditions. How are markers chosen that indicate individuals are different species?

Or does this process occur the other way around? Are species identified as being different, then DNA used to identify which members are which?

You can compute various statistics of group divergence. Typically you could consider the pairwise number of differences between any pair of individuals. For example the following two sequences

Often, individuals really group together quite naturally (if you perform a principle component analysis you will see clearly defined groups) but sometimes the groups are quite blurry.

The definition of species is arbitrary

Whether the grouping is blurry or not, it is often quite arbitrary how much two groups need to be different in order to classify them in different populations, different subspecies or different species, different genera, etc...

The problem here is more a problem of definition than a technical problem. You should have a look at this post to understand the issue behind the definition of species.

My attempt at a high school level explanation

Explain what a phylogenetic tree is

First draw a phylogenetic tree. Explain what they mean:

You can get a short introduction to phylogenetic trees here on Biology.SE or here on Understanding Evolution.

Methods to reconstruct a phylogenetic tree

Let them wonder how we could get to know what the true phylogenetic tree is.

Suggest using phenotypic data and make them realize and if you put all the yellow flowers together, or the flying organisms (insects, birds, bats, squirrels) it won't work very well. So phenotypic data can sometimes be misleading. So explain that we can use genetic data by counting the number of pairwise differences. Let's consider the three different sequences

It sounds like the first two sequences are more closely related than any of them are to the third sequence. You can draw the tree for these three species.

Knowing the rate at which mutations occur, one can date since when two lineages diverged based on genetic data. You will probably have to learn a bit more about molecular clock for yourself. You may ask a for high school explanation in another post.

Of course there is genetic diversity within a species that renders everything a little bit more complicated. For example, some of you have blue eyes while others have brown eyes (assuming there is variation for eye color among your students), this is due to the fact that the DNA sequence within each of you is a little different. Not as different as it is between humans and chimpanzee but a little bit different.

Then, you can say that genetic data can allow us to tell groups apart. You can show a PCA type of plot (without really explaining what a PCA really is) with colors. Each color correspond to a population (insiste on term population and not species). Something like 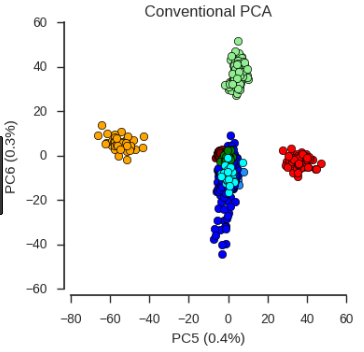 and then argue informally that light-yellow, green and red populations are probably different species while all the other populations seem to belong to the same species.

Problem with the species definition

If you really want to bring the question of the how to use genetic data to tell species apart, then you will first have to destroy their concept of species! For that, you should first have a look at this post. You will have to

Then, get back to the PCA and ask, how different two populations must be for them to be called different species? And make them realize that this is rather arbitrary. We can tell they are different lineages but it is up to everyone to decide what we want to call a species. However, very often vague intuition about how different a species should be is good enough.

Not the answer you're looking for? Browse other questions tagged species-identification dna-sequencing species or ask your own question.

85
How could humans have interbred with Neanderthals if we're a different species?
20
Transitivity of Species Definitions
4
Why do the ancestors of birds still exist?

4
How are two species with similar phenotypes identified as different?
9
Why can't we call dog breeds different species?
85
How could humans have interbred with Neanderthals if we're a different species?
4
Determining the Accuracy of DNA Testing
0
How does a test like the Natera Panorama distinguish the child's genome from the mother?
4
Was Darwin aware of the difficulties behind the concept of species?
0
How can DNA profiling be used to determine the number of organisms from a specific species that is within a certain area?
1
How many generations does it take for one species to become a new one?
0
what is “a group of living things that can interbreed and produce full interfertile offspring”?