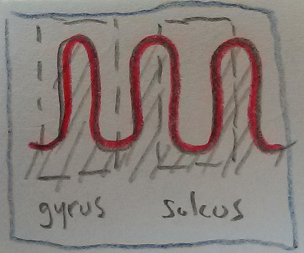 As the main evolutionary advantage of sulci/gyri stands the enlargement of the surface of the brain, i.e. the neocortex.

As another evolutionary advantage of gyri (not sulci) Wikipedia mentions "increased speed of brain cell communication".

But there seems to be another (as usual: unintended) evolutionary advantage of gyri (not sulci) which I could not find discussed/investigated/analysed in detail: being prerequisite of internal long-range connections of the neocortex in a somehow systematic way (which goes beyond mere "increased speed"): 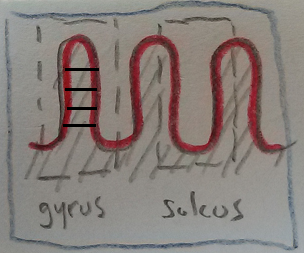 I am looking for references where this - possible - evolutionary advantage is discussed.

Addendum: In the above mentioned Wikipedia article on gyrification one reads

If this was true (it's only stated as a hypothesis), it would suggest that folds are a consequence of such connections, not their prerequisite.

Addendum: In Gray's Anatomy I read:

Browse other questions tagged neuroscience neuroanatomy or ask your own question.