Wikipedia in its article on 'Glycosuria' says that the renal threshold for glucose (RTG) reabsorption in the kidney is around 160-180 mg/dL. Beyond which the glucose starts to excrete in the urine. But in diabetic people blood glucose exceeds in range of 300-400 mg/dL is prevalent. How this is possible? What prevents the the excretion of excess glucose into urine?

Or is it possible that the excess glucose (beyond RTG) is actually excreted out of blood in the kidney but the hyperglycemia is caused by the fresh gluconeogenesis of the body?

Or is it possible that both these mechanisms (RTG is exceeded as well as fresh gluconeogenesis) cause in furthering the hyperglycemia?

Is it possible to measure this state?

Classic symptoms of untreated diabetes include excessive thirst and urination, and glycosuria. Think about the solute gradient. At some arbitrary number the level of glucose becomes saturated. The kidneys are forced to get rid of the extra glucose in urine. This increases the concentration of solutes in the urine, so where does the water go? Right? So that high blood glucose concentration translates into frequent trips to the bathroom, and frequent need to consume fluids. This can also lead to a fluid/electrolyte imbalance, which is potentially dangerous.

There's actually a limit to what can be reabsorbed, denoted the transport maximum, but, you can only eliminate so much solute over time, so here's a figure from a Pearson physiology chapter: 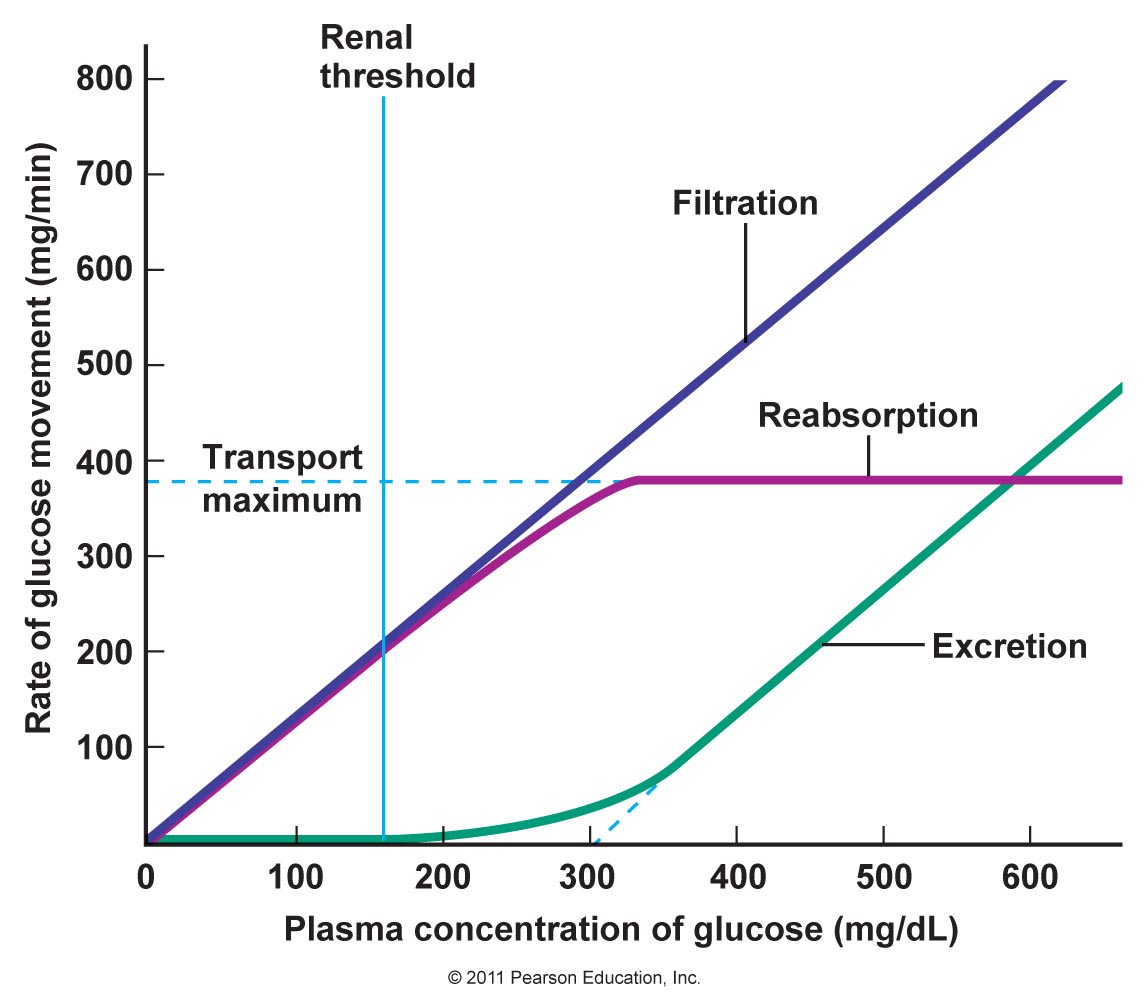 You've got your renal threshold around that 180 mg/dL but look at that excretion kinetic. It's known that the excretion rate increases linearly with the filtration rate above the renal threshold (ref). So say i'm an average male with 400 mg/dL plasma glucose and 50 dL of blood or 20 g of net plasma glucose. All other things held equal, it looks like it could take around 2 hours to clear that glucose on excretion alone, which doesn't typically happen. Clearance is also outlined in that Pearson chapter, and you can measure that by knowing the excretion rate, and the concentration of glucose in the urine and in the plasma.

Data shows, however, that the filtration/reabsorbtion process is maladapted in a diabetes model, and increased plasma glucose levels are maintained by an up-regulation in glucose transporters (thus an increase in the transport maximum), and an increase in the renal threshold (and thus the kidneys only begin to excrete glucose at a significantly higher level) (ref).

Not the answer you're looking for? Browse other questions tagged diabetes-mellitus or ask your own question.

4
How would real-time blood glucose monitoring work?
8
Do blood glucose "spikes" contribute to insulin resistance, or is prolonged elevation required?
0
Diabetes Mellitus and renal failure?
0
What are some potential consequences for attempting to cure Type one Diabetes?
0
Finding out the best concentration for my plant extract to be used as drug for diabetes
3
Is it unusual for a child to be diagnosed with diabetes?
2
What happens to glucose taken up by the liver in type 1 diabetes?
3
How much does 10g of glucose raise the blood glucose level?
3
What terms or concepts are used to describe the morning metabolic phenomenon involving glucocorticoids, glucose, and blood pressure?