What is the basis of the endocochlear potential?

From these numbers, it seems like perilymph contains more positive charges than endolymph. How is it possible that the potential of endolymph is highly positive (80-90 mV) compared to perilymph? Shouldn't it be the other way around?

I have searched the forum and the internet for answers, but my question seems so basic (or based on a very fundamental misunderstanding) that I can't find anything of help. The only explanation I keep seeing is that the high potassium concentration accounts for the potential. However, isn't that outweighed electrically by the excess of negative ions in contrast to the perilymph?

Biological potentials on the order of tens of millivolts depend on very very few ions moving (about 1/100,000 of the potassium concentration, for example, for a typical neuronal potential).

Therefore, the sum of positive and negative charges in any compartment is always almost zero (to several decimal places and beyond measurement; if you say a ). Electrical forces are very powerful, and

Some previous answers that are related:

The endocochlear potential in particular - this is really cool

Everything I said above basically can be summarized in a quick statement: you can't figure out potentials just by measuring ion concentrations and summing them up. If you counted all the ions (including charged proteins, etc), you'd get ~0 in any biological solution. Instead, you have to think about where the concentration gradients are and how particular ions are moving. Let's tackle the endocochlear potential... Hibino et al 2010 has an excellent diagram, adapted from their previous 2008 paper: 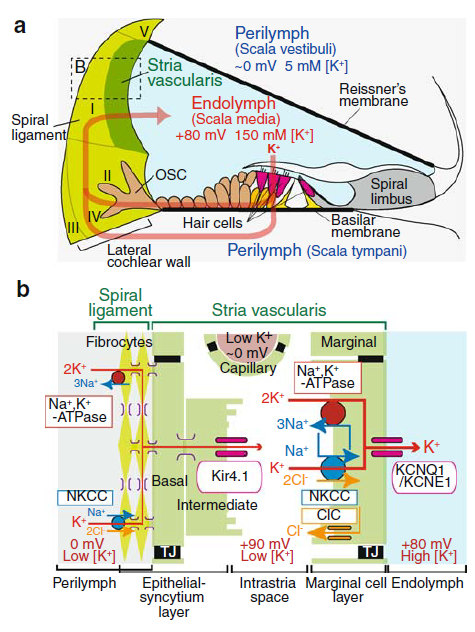 Between the perilymph and intrastria space, there are a collection of cell types all connected via gap junctions. We can treat them sort of like one big cell, I'll call it the syncytium. A sodium-potassium ATPase uses energy to pump potassium into the syncytium and sodium out (upper left of [b]). Additionally, because there is now low sodium in the syncytium, more potassium enters through NKCC channels, which are symporters that move 1 sodium, 1 potassium, and 2 chloride ions together.

Normally, not many ions would actually flow to create this potential (on the order of the 1/100,000 I mentioned above) and everything would stop there. However, there are another set of pumps and channels in the marginal cells. The marginal cells also pump potassium in, via the sodium-potassium ATPase and NKCC channels, keeping potassium concentrations in the intrastria space low, such that potassium continues to flow down its concentration gradient from the syncytium.

Ultimately, there is a full circuit of potassium because potassium is flowing into hair cells from the endolymph, and then back out to the perilymph. The sodium-potassium pumps use energy in the form of ATP to maintain the imbalance between perilymph and endolymph.

Hibino, H., Nin, F., Tsuzuki, C., & Kurachi, Y. (2010). How is the highly positive endocochlear potential formed? The specific architecture of the stria vascularis and the roles of the ion-transport apparatus. Pflügers Archiv-European Journal of Physiology, 459(4), 521-533.

Not the answer you're looking for? Browse other questions tagged neuroscience membrane or ask your own question.

5
Why is it possible to calculate the equilibrium potential of an ion using the Nernst equation from empirical measurements in the cell at rest?
2
Why does resting potential not become continually more negative?
3
Neuronal membrane resting potential for large cells
2
Why is the resting membrane potential of excitable tissue not affected by the extracellular sodium concentration?