I wonder if the thrombus can pass through the brain-blood barrier because I think small molecules like O2, CO2 and ethanol can pass it. Probably, in some diseases where the permeability of the barrier changes.

This question seems to stem from a misunderstanding of the nature of the Blood-Brain-Barrier, the circulatory system of the brain and of thrombi. The BBB is describes differences in the structure of the walls of the blood vessels of the brain, it is not a barrier to flow within the vessel, but a specialized barrier to flow out of the vessel. In many tissues the walls of capillaries (the smallest vessels) are not tightly adjoined, small molecules and even some proteins from the blood are able to pass through these minute gaps between the endothelial cells and into the tissue.

However, in the brain, these endothelial cells are tightly linked in a specialized fashion that prevents the non-specific travel of solutes between cells. Instead, molecules that cannot diffuse through the membranes of the cells must be actively transported across them (cannot leak across).

An intravascular thrombus is much larger than these minute gaps, it is often considerably larger than these small vessels and becomes lodged in larger arteries, blocking flow. There is no passage through the BBB, but there is no passage of the thrombus through the walls of other capillaries in the body either. The damage caused by the infarct is due to the blockage of flow in the larger vessels.

The circle of Willis is no magical stopping point either. Many important sites of infarct (such as the MCA middle cerebral artery), micro-infarcts in even smaller vessels can also cause difficulties.

In short, thrombi and the Blood-Barrier-Brain exist on different scales, the presence or absence of the BBB is irrelevant when discussing the capacity of a thrombus to occlude arteries.

No, a thrombus would be much too large to pass through the highly selective blood brain barrier. However, there are some cases where intra-vascular thrombosis can cause stroke.

One example would be non anti-coagulated atrial fibrillation, where the inefficient beating of the heart causes blood to remain stagnant in the left atrium. This can cause a thrombus to form within the atrium which can then throw off emboli, some of which may enter the cerebral circulation. These may then partially or fully occlude one of the arteries in the Circle of Willis (the brain's circulation system), however the blockage is proximal to the blood brain barrier.

See Management of atrial fibrillation (GY Lip,2007) or for those hitting a pay-wall the professional reference section on AF

No, thrombi are far too bulky to cross the blood brain barrier. Now regarding the risk of stroke in case of systemic thrombi Yes, there are 2 situations where this can arise:

The question has a vague term cause which is confusing people here. For me, it means that the event increases the risk of the outcome. For some others, it means the event is a definite factor in resulting in the outcome. So I avoid answering to the question Yes or No because of different interpretations of the term.

The Role of the Left Atrial Appendage in AF-Related Strokes, 2013.

which specificity and sensitivity are not so high which has resulted in many variations of the initial CHAD VASc score, for example in this study:

To improve this score is ongoing research: 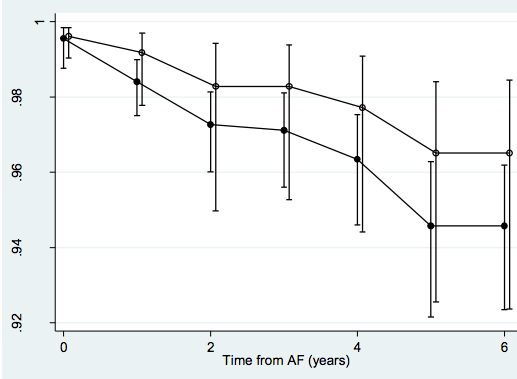 The interaction of the permeability of the brain-blood barrier with the stroke risk is much unknown. The following factors interact with the BBB's permeability

CBF interaction with the risk of stroke is unknown field

Not the answer you're looking for? Browse other questions tagged cardiology blood-circulation pathogenesis or ask your own question.

0
Can systemic venous congestion caused by tumor?
0
What are these white areas of coronary thrombosis?
0
Pathogenesis of chronic venous congestion in skin?
0
Can pulmonary infarction be asymptomatic?
3
What is the effect of persistent hypothermia on cardiac performance?
3
Heart Rate being normal when under treatment for the bends
4
Why doesn't the rest of the body have something like the “blood-brain” barrier to protect itself from pathogens?
5
When endothelial cells in blood vessels (arteries or veins) are damaged, does atheroma form first or blood clot?
1
How much does capillary action contribute to blood flow to the human brain?