What is the minimum eye?

What is the minimum eye which confers some evolutionary advantage?

By minimum I mean anything less than this has no advantage whatsoever and therefore is not favored by natural selection.

By eye, I mean not just a light sensor but also infrastructure which converts the light stimulus into an advantageous response.

Ideally would like a clear unambiguous before/after case especially on the infrastructure between the mutated protein and the cell's response mechanism which translates this into a survival advantage.

please also provide an estimate of the number of coordinated DNA base pairs which needed to change to confer this advantage so that a proper probability estimate can be done.

I think that you are expecting for some complicated system while such things are not necessarily involved. You basically just need a protein that is light-sensitive and some cascade of signal transduction. A light-sensitive protein is just a protein which conformation is changed in the presence of photons of a given wavelength. This cascade of signal transduction can be very standard. It doesn't need to be anything extraordinary.

Consider a mutation that turns a given protein into a light-sensitive protein. Such mutant protein could easily still activate the same cascade (and eventually regulate the expression of the same gene) and may eventually be beneficial. A visual signal (presence/absence of photons of a given wavelength) directly affect the conformation of the protein which in result can activate a whole cascade. The cascade doesn't need to have evolved after the protein had acquired the ability to response to photons. You may want to dive into the details of how the structure and function of the opsin proteins.

This article describes how an ancestral non-light sensitive protein (coded in GPCR gene. The proteins are also called serpentine) evolved into a light-sensitive protein (opsin). The article also link to other articles that discuss this transition.

There are several types of light-senstive proteins in different kingdom, including plants and bacteria that don't have nerves.

Wikipedia page: Evolution of eyes > Early Eyes will probably interest you as well. Depending on the definition you use for "eye" (note, "eyes" have evolved independently 50 to 100 times), Planarian might be a good example of a species that have a primitive eye.

A relatively simple proto-eye is the pineal gland. It has been considered to be the third eye and it is involved in circadian rhythms in man, it is involved in thermo regulation, and in reptiles and amfibians it is in fact directly light-sensitive.

However, it is not an eye as such, because the pineal does not convey topographical information about the environment to the brain. It is more of a light sensor in reptiles and amfibians. However, it is a sensor embedded in the central nervous system of higher organisms including humans. As such, it is not just a light sensor, but an endocrinic organ involved in the light-based entrain of endogenous circadian clocks present in various organs. It has been implicated to be an integral part of the visual system in early life: 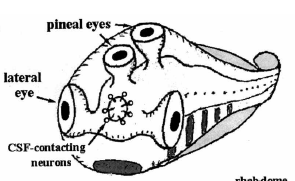 The hypothetical system in the picture is not so much different from the lancet fish today, a 'living fossil'. In early life, and reptiles and amfibians today, the pineal is directly light-sensitive and thereby entrains the circadian clock directly via endocrinic functions. Synchronizing the circadian clock helps organisms to adapt to the environmental light periods, in other words prepare diurnal creatures to wake up in the morning and get ready to hunt etc. Hence it aids survival of various species in different biotopes (Vigh et al., 2002). In humans and other mammals with a dense, solid skull light-sensng is taken over by the retina, as the skull prevents admission of light. Here the pineal has only an endocrinic function receiving afferent input from the eye.

Not the answer you're looking for? Browse other questions tagged evolution eyes vision or ask your own question.

-4
Evolution of complex organs
1
What is the minimum functional biological light sensor?