Reconstruction of wildlife distribution based on poorly-sampled data [closed]

Hi, I thought I'd also put this here in case there are any field biologists with ideas on the matter.

Problem: After reading a series of fantasy novels, I noticed that the biosphere in that world made no sense. To clarify, this is a world where despite magical occurrences, the world itself is almost entirely non-magical. 'Alternate history magical realism,' perhaps. i.e., unlike, for example, Harry Potter, in which almost all plant and animal species mentioned are fictitious and magical, this series uses real flora and fauna. This allows me to extract information about the fictional world's environment based on the distribution of these animals, by assuming that similar animals will live in similar climates on Earth and in the fictional world.

Ignoring the likelihood that the original author did not put enough thought into worldbuilding to make this a necessarily reasonable endeavor, my idea for how to proceed was as follows:

As maps exist of the fictional world, and the path of the characters can be plotted, I hoped to mark every mention of a specific plant or animal in the text, along with the location of the characters when it occurred, and from this reconstruct a plausible distribution for each species. I've created a theoretical example (in photoshop), for illustration: 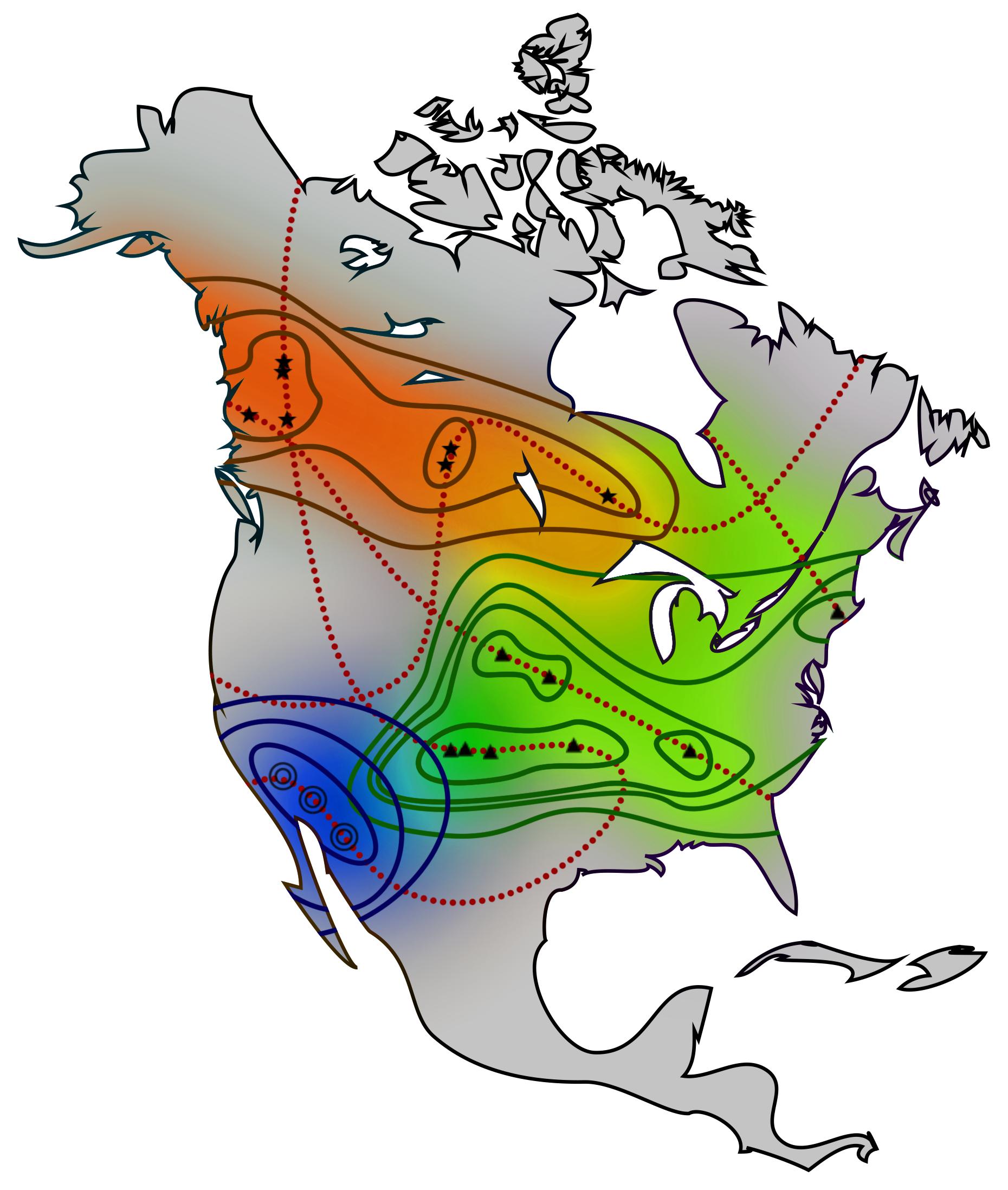 Is there a method to do such a reconstruction? It sounds a bit like a Monte Carlo analysis, but I figured I should check... (It also sounds rather like the magical programs detective shows use to plot serial killers' locations)

Note: It should be clear from the problem statement that just because a species is not mentioned at a specific location does not mean that it does not exist there. i.e., a sample at a specific location returning only 'A' - 'Bill and Jeff saw a lemur.' - does not exclude the possibility of 'B' and 'C' also at that location, but not sampled. Just because the text may specifically say that Bill and Jeff saw a lemur, and doesn't mention any other flora or fauna doesn't mean we should assume that they are in a universe devoid of anything but the occasional lemur.

Sorry for the long-winded explanation. Any thoughts?

The problem of how to infer species distributions from scattered species occurrences is common in ecology, and there exists a number of methods to construct distribution maps. As a start, you should have a look at Species Distribution Models (SDMs) using regressions models or Maxent, and the paper by Elith et al (2009) is a good starting point and a standard reference. SDMs using maxent is now a common approach, which integrates species occurrences as point data along with environmental layers (e.g. temperature, moisture and topography) to predict species distribution maps, and this can also include absence data or "pseudo-absence" data (randomly sampled data from a region of interest). The maxent software is described and can be downloaded here: http://www.cs.princeton.edu/~schapire/maxent/ A common criticism against distributions produced by Maxent is however that they ignore e.g. species interactions, and they only considers the species occurences and the environmental variables that has been included in the model.

In your "Note", you touch upon the issue of detectability, which is an important issue that has received much attention recently. The problem is largest when you only have presence data, and to have real presence/absence data is preferable. Even if you don't have real absenses (the species has been searched for but not found), an estimate of sampling effort in different areas is still very useful, since this means that you can at least evaluate whether absenses is due to "real" absense or lack of sampling. In your case, the movement paths of characters could be used as a measure of spatial "sampling effort". The main issue with detectability in studies of distribution of species trends is if there is trends or bias in detectability, which means that apparent changes over time or patterns in distribution might be due to differences in detectability and not real differences between areas or over time. This could for instance be the case if observers are more likely to spot a species in one type of habitat (open savannah) then in another type of habitat (closed forest). Useful starting points for issues of detectability are Dorazio (2014) (technical though) and Kery et al (2010).

Not the answer you're looking for? Browse other questions tagged ecology measurement visualization species-distribution or ask your own question.

2
How do I compare the variance of a distribution of species in one area versus another?
4
Using Canonical Correspondence Analysis on matrices with missing data
3
How does the ideal free distribution work?
6
Where should I go for online information on animals endemic specifically in Mozambique?
7
Where can I find comprehensive data on animal distribution?
4
Can you extract specific data from EEG