Is "exhaustion" of the Hodgkin-Huxley membrane at constant stimulation a real phenomenon?

I was playing around with a simulation of the Hodgkin-Huxley model using their original parameters for the squid giant axon.

By applying a constant stimulation current to the model in resting state, an infinite train of action potentials is triggered, which seems reasonable. However, if the current exceeds a threshold, these APs die off very quickly as both the membrane potential and the ion conductances reach a steady state.

What is this phenomenon called? Is it a real phenomenon, or just an artefact of the Hodgkin-Huxley model? 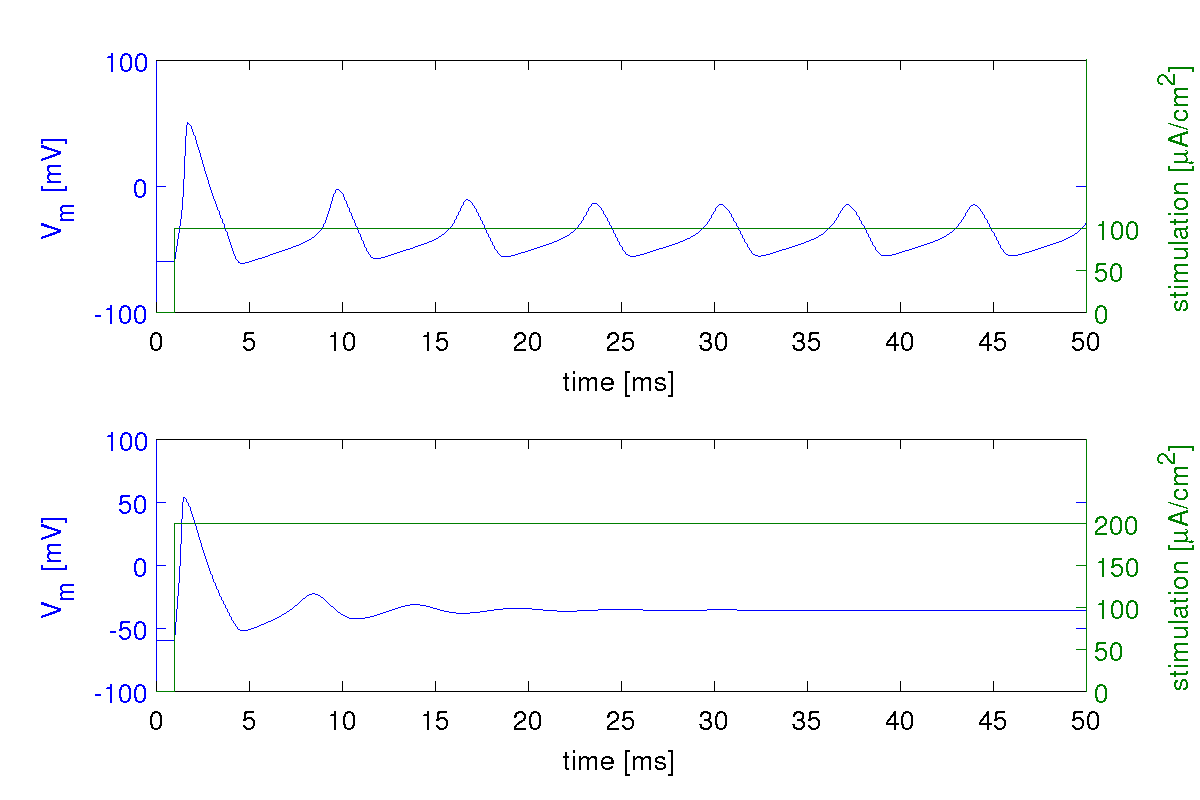 This phenomenon is called depolarization block and it occurs in real membranes in current-clamp experiments.

The key mechanism is that the membrane has not been allowed to repolarize sufficiently to relieve the inactivation of sodium channels. The Hodgkin-Huxley model reflects this in the "inverted" voltage-dependence of the h gate (sodium inactivation gate)--inactivation is greater at higher voltages. This means that sodium channels cannot open again, or trigger another action potential, until the membrane is repolarized. Canonically, the need to relieve inactivation of sodium channels is the reason for the afterhyperpolarization phase of an action potential where the AP downstroke becomes transiently more negative than the resting potential.

(I probably ought to have a pat answer to this on the tip of my mind, but since I don't I'm going to wing it. This is probably just an opportunity to make an utter fool of myself. Please treat everything that follows with extreme suspicion.)

I think this is effectively an artefact of the model. That may not be true in the strictest sense -- it is possible such behaviour could be produced in real experimental preparations -- but it would require driving them in drastically non-physiological ways. I am not aware of this having been done, but I'm sure that's just my ignorance -- I would be surprised if nobody has tried.

In physiological terms, though: where would such a large constant current come from in a real cell? Where would the charges go? How would that be sustained with realistic boundary conditions?

While it is possible that such an effect can come into play very transiently in living systems, it seems unlikely that a true steady state of this kind could ever be reached.

10
How is membrane capacitance related to the increased speed of saltatory conduction?
9
What keeps the resting potential of neurons constant at -70 mV?
7
What is the reason behind high resting membrane potential of pacemaker cells?
5
How's the membrane potential restored to resting state after hyper polarisation?
1
Introducing evolution into the Hodgkin-Huxley equation
1
Measuring depolarizations over the membrane
1
Why the length constant of passive current flow isn't depend on the membrane capacitance?