The Sanger sequencing method creates large numbers of sequences of all possible lengths, ending with a specific nucleotide, by terminating with a tagged (fluorescent) nucleotide at the end.

But if you already have fluorescent nucleotides of a specific base, why not just do regular PCR with them, create a huge number of full length copies of the original sequence, and then simply see the locations where the nucleotide fluoresces to determine all the locations of that base. Why do we need a large number of copies ending at each possible location, as with the Sanger method?

If you mark the full length strand of the DNA with the fluorescent labels, you will get a lot of signals from the same nucleotide without the possibility to discriminate where the actual nucleotide is located on the strand.

Sanger sequencing doesn't end with the preparation of the terminated and labelled DNA strands, the following step is crucial in discriminating where the labelled base actually is. After labelling, the sample is run through high resolution capillary gel electrophoresis to sort them by size. The smallest fragment comes out first, then the one with one base more and so on. The detector which then identifies which fragment is coming through is located at the end of the capillary.

This works like shown in the schematic image (from here): 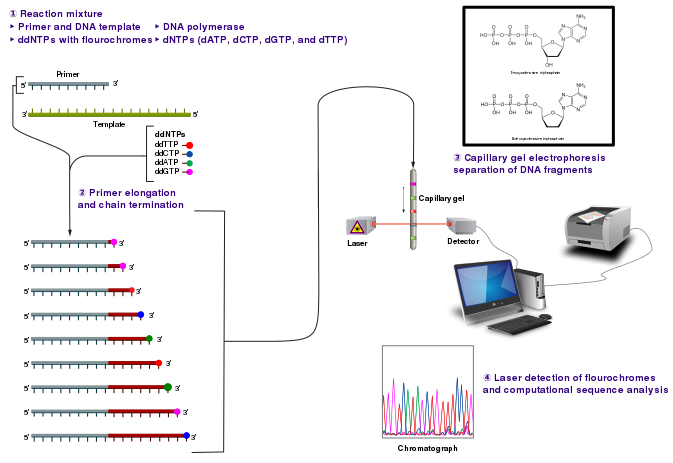 If you would mark a complete strand, no dicrimination by size is possible (ideally, all DNA would run on the same height of a gel) and all flourescent signals for all positions would come on the same spot. Not very helpful.

I originally suggested closing this question as I think it confuses methodological details with strategy. There is an accepted answer that clarifies things with a clear diagram of the Sanger method. In the circumstances I decided to add a different sort of answer — one that emphasises the principles involved in the different approaches, rather than practical details which are not intimately associated with logic of the different approaches.

Irrespective of the method, the determination of DNA (or any linear) sequence requires two pieces of conceptual information: 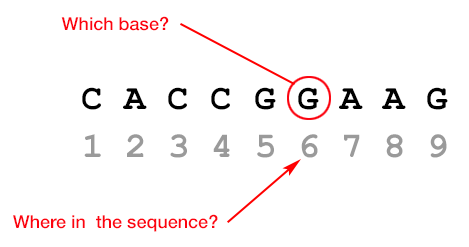 Let us compare these in three different sequencing approaches.

Here the DNA to be sequenced labelled at one end is treated with different chemicals that cleave at different bases in separate reactions.

B. Chain termination during synthesis (Sanger)

This method uses enzyme-catalysed copying of the DNA to be sequenced, with termination of the copying produced by the four di-deoxy analogues of the deoxynucleotide triphosphates (dNTPs) in separate reactions.

(Note to the poster: obviously you need fragments of all different lengths if you are going to identify the base at each the position in the chain.)

This type of method also uses enzyme-catalysed copying of the DNA to be sequenced. However, there is no termination of the chains, as in B, but the cycles of addition are followed by various techniques.

In stressing the general principles of DNA sequencing the methodology mentioned has been limited to that required for detection — there was no need to even mention PCR. Of course, different methodologies for preparing multiple samples for sequencing have hugely influenced the speed and cost of DNA sequencing. However the student should understand the principles before getting bogged down in the details, which can be found e.g. in this Wikipedia article on sequencing and on the website of ATDBIO (albeit a not disinterested company).

1
During DNA foot-printing, what is the purpose of radioactively labeling only one end of the DNA fragment?