What is an intuitive explanation of linkage disequilibrium?

Is it possible to give a simple and intuitive explanation of the concept of linkage disequilibrium? You know, so I can sort of sound like I know what I'm talking about. Everything I read about it has me lost.

I am a writer and specifically I write lyrics and raps and I love this phrase "Linkage Disequilibrium". I would love to put it in aa rap I'm writing about a friend of mine.

During sexual reproduction, the process of crossing-over means that parts of the maternal and paternal chromosomes become shuffled up with one another into chromosome 'chunks', as shown by the red and blue colours here: 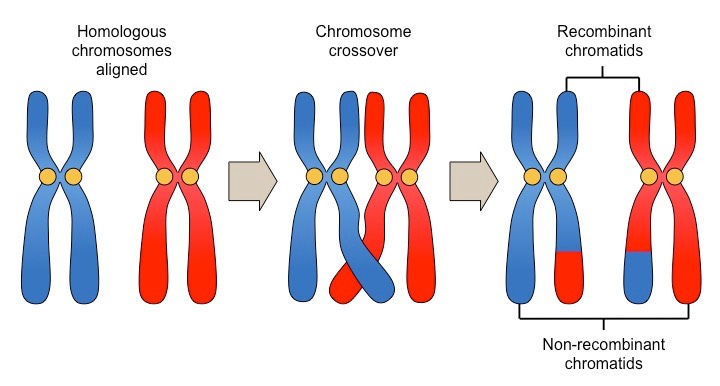 All other things being equal, we say that the markers close to each other are in high linkage disequilibrium (LD) with one another and markers further apart with be in lower LD with one another. In other words, the probability of recombination occurring between two markers, driven by physical distance and variable recombination rates is what causes differences in LD.

If we want to get a bit more in depth, then the recombination rate (i.e. the probability of a recombination event occurring between any two markers) varies across the genome. Something like a gene fusion event may totally impede recombination, meaning that region is always inherited as a single 'LD block'. This can result in things like supergenes in eusocial insects. Conversely, there are regions of very high recombination which reduce the amount of LD between markers.

Not the answer you're looking for? Browse other questions tagged genetics recombination genetic-linkage or ask your own question.

6
what is linkage disequilibrium supposed to measure?