How do I make conclusions from the autoradiograph of a Southern blot?

Here's another question taken from "Concepts of Genetics," Klug et al (10ed), revolving around a paternity test. PCR and a Southern blot were carried out in order to determine whether 3 chimpanzees (lanes 3, 4, 5 in the blot below) were the "legitimate" offspring of 2 potential parents (lanes 1 and 2).

The question makes a point of saying that the primers used to bind to the chimp DNA originates from humans, and that they "flank highly polymorphic sites in human DNA that result from variable numbers of tandem nucleotide repeats." My first question is what exactly does "flanking" mean in this context? It sounds to me like the human DNA "mirrors" the chimp DNA, and so makes it good enough to use as a primer, but I'm not sure.

I've come across a few other examples not in the text about how to infer whether a potential parent is indeed a parent based on whether the offspring's lane contains bands found in both the maternal and paternal lanes, which leads me to believe I can rule out the chimp in lane 5.

I'm given five answers to choose from to decide which of the offspring, if any, are legitimate:

Main questions: Does that fact that we're using human DNA as primers cause any problems? Do we know enough from this blot to determine paternity? 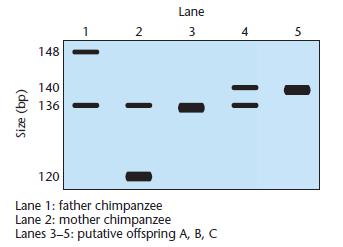 As @canadianer pointed out in the comments section flanking sequence is a sequence that is immediately near the target on either side. Since chimps and humans are closely related and the sequence different is minimal (according to this paper its approx 4% for the entire genome) so using human primers is totally fine. Now if take a look at the picture of the gel: The answer is 2. only A because only this offspring has a variant in large amount (that can be determined from the width of the band) that can be acquired from both parents and in this case chimp A actually did inherit the 136bp variant from both parents.

For chimp 4 either parent can be the same (as for chimp A) from the two because it has the 136bp variant as well ( that can be inherited either chimp one or two), but has a different one that cannot come from chimps 1 and 2.

As you said chimp 5 can be ruled out instantly because it has a large band that cannot be found in either of the two parents.

Not the answer you're looking for? Browse other questions tagged genetics homework biotechnology or ask your own question.

2
How can Southern blotting be used to establish gene copy number?
1
Conclusions from hybridization results
2
Are genotypes with the same two alleles equivalent even if the alleles come from different parents?
2
How does the sticky ends of foreign gene bind with its counterpart in the plasmid DNA if positions are not matching?
7
How can I make a protein interaction/protein-complex network?
1
Can you make sperm and eggs from the same person using in vitro gametogenesis?
1
Blood and hair follicles from 25 people put on the Moon; enough to regenerate a human population?