What is the biochemical explanation for tingling and burning sensation in brain due to certain food?

Consumption of mustard (spicy English Mustard), wasabi and horseradish based food dressings usually result in a burning, tingling or freezing sensation in the brain/scalp and nostrils as the vapour goes through the nasal cavity.

I read somewhere, the checmical which gives the burning sensation is isothyocyanates. And some of the posts roughly mention about sinuses being agitated due to this chemical vapour.

How to explain this from biochemical and biology aspect? e.g. What sort of a cell reaction, if any receptors involved etc. (Appreciate an answer that is similar to the type of explanation here.)

You are right the compounds provoking this burning/tingling sensation is called allyl isothiocyanate.

We (human) perceive these compounds in two different ways when ingested, namely via the gustatory and olfactory systems. The molecular receptor sensing isothiocyanates is called the transient receptor channel A1 (TRPA1) [ref].

Here a simplistic view of how ingredients are perceived: 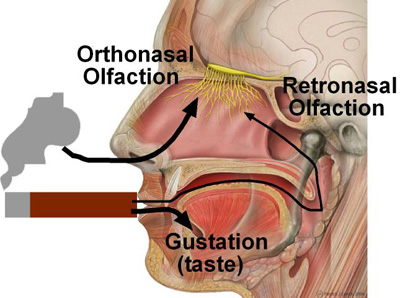 Not so surprisingly, isothiocyanates will again be perceived by sensory cells of the olfaction system via TRPA1 hence a burning sensation in the nostrils.

How receptor activation leads to a neuronal stimuli

This is a very broad subject and I will only give an overview of what is happening. We first start with the activation of a receptor by an agonist (in your question, isothiocyanates binding and activating TRPA1). Upon binding of the agonist the conformation of the receptor will change from an inactive to an active state. The way the signal is transduced varies according to the type of receptor but for the TRPA1 channel what happens is that the channel opens leading to an influx of calcium ions ($Ca^{2+}$) in the cells which changes its electrical state (as calcium ions are positively charged), a phenomena called depolarization. Depolarization of specific sensory cells (here the one expressing TRPA1) start an electrical signal in the nerve which travels to the brain where it is then decoded. The exact way the brain decodes sensory signals is still under debate but a likely explanation is that only some neurons within the nerve are activated which allows the brain to decode the sensory signal based on the nerve activation pattern. As an analogy, it would be the same as having only specific wires (neurons) turned on within a bundle of wires (nerve).

If you want to further extend your knowledge on taste perception at the molecular level read this excellent review Chandrashekar, 2006. For a in-depth review on olfaction refer to this book. For a book on signal transduction refer to this while for TRP channels activation this is a good reading.

The field is quite broad and there are many good references. Sensory perception includes two distinct and broad fields namely neurosciences and cell signalling.

Not the answer you're looking for? Browse other questions tagged biochemistry molecular-biology sensation or ask your own question.