What does the thalamus consist of?

There is a long list of thalamic nuclei which are somehow embedded in the thalamus, a "large mass of gray matter located in the dorsal part of the diencephalon", according to Wikipedia.

I wonder what the nuclei are embedded in: 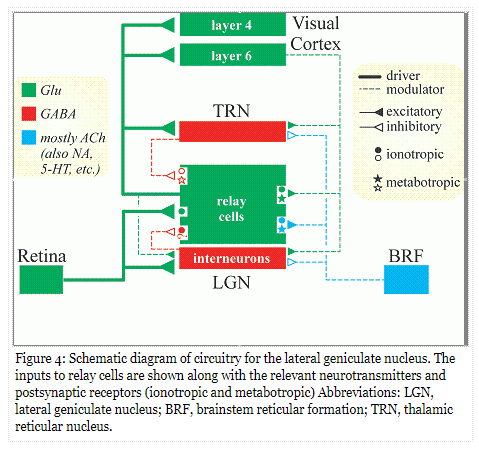 This is an interesting question with good comments. I did medical school, and I am here on unix.se, so let me give some thoughts:

There is no room for a "pool of glia cells" - from tip to tail all the neurons and their axons are highly organised.

Now the brain is already complicated. It is divided into 5 segments, and the Thalamus is quite in the center of everything. Some other nuclei (e.g. the ones connected with the 12 head nerves) have a well defined function, but the Thalamus is hard to define.

The famous "limbic system" is close by, and is also complex.

A high resolution MRI should give a good estimate of neuron/myelin distribution, to the millimeter. But I am afraid it is not an easy gray-or-white question, but some complicated arrangement, with e.g. short unmyelinated axons.

(The MRIs can look very different)

It is even worse than I thought: this histologic picture shows how hard you have to look to even define a nucleus. 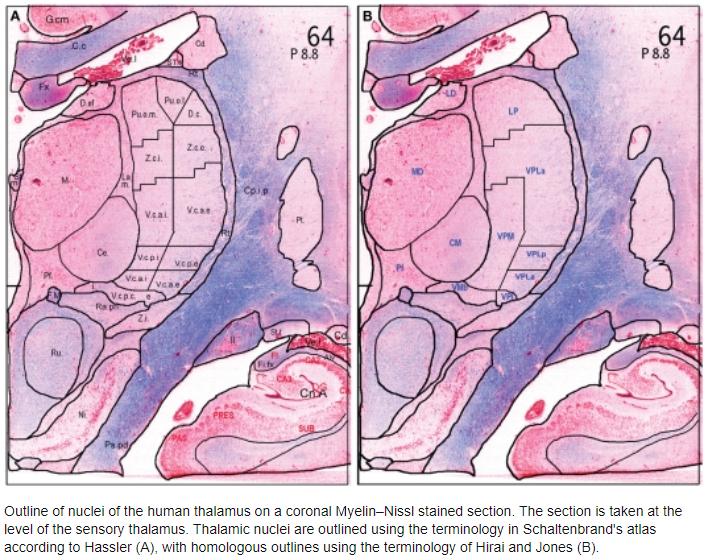 "thalamus histology" give very nice results in google. In the MRIs you can mostly just see that it is something a bit in between gray and white.

First I checked Nissl stain: this really colors neurons (body and dendrites), but not axons.

The stain is labeled "myelin-nissl", and it is blue and magenta, so this must be a combination. But -- I can't even tell which is which!

Well it must be pink is neurons, and thus blue is myelin. This makes sense with the Cn A = cornu ammonis = hippocampus region bottom right, the pink-white spiral, and with the outlining of nuclei. But very counter-intuitive...I trust them it is the appropriate stain.

Keep in mind this is a section to show the nuclei (at their max?), so other parts/sections will look quite different.

Not the answer you're looking for? Browse other questions tagged brain neuroanatomy or ask your own question.

1
How does the brain regulate its temperature?
0
What does it mean "specialized populations of neurons"?
2
Confusion about the brain regions - temporal cortex, hippocampus and and white matter
1
In what situations, when reacting to impressions, are the signals sent directly from the thalamus to the hypothalamus?
9
What is this structure in human brain?
4
Is olfactory input processed by the thalamus?
1
Does the cranial dura consist of the periosteum? and if not, then is there a mistake in my textbook?
0
Umbrella term for "parts of the brain"