I need help with this practice question. 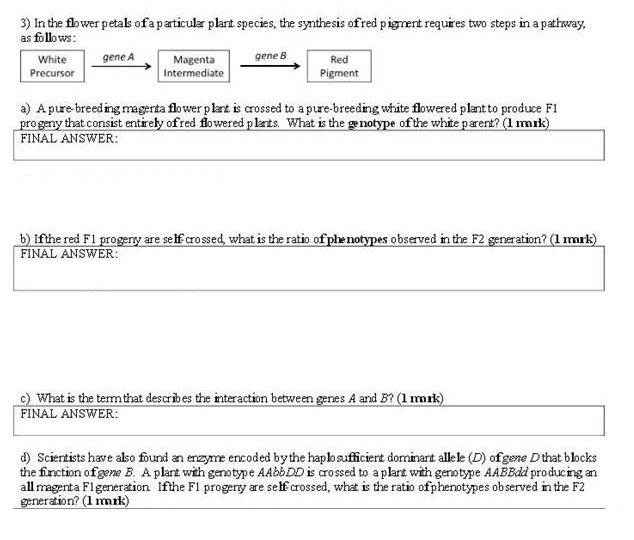 I'm assuming that would a epsitatic recessive question since the parents are true breeding and then the ratio would be 9.3.4. But I am not so sure.

Any help would be greatly appreciated thanks!

The Magenta variety is pure breeding, and hence must be homozygous at both loci, (Dominant at Gene A and recessive at Gene B), otherwise, in some of the generation along the family line, there would have been a non-magenta flower, which contradicts the pure breeding nature. But the same cannot be said for the pure breeding white variety, as it can still be homozygous recessive at Gene A and heterozygous at Gene B, it would still exhibit white flowers in all of its progeny after any number of generations.

But the fact that all the progeny of the cross between white and the magenta variety turns out to be red, removes the possibility of the white variety being heterozygous, as that would have produced atleast some magenta plants. Since all were red, we can be certain of the genotype of both the parents, and consequently of the F1 progeny.

This solves your first question. The second question needs the extrapolation of the information gathered while solving the first question into a Punnett square and a simple probability calculation. The third question is a factual question, but it must be mentioned, that this particular type of interaction can be classified under more than one type, and hence a single answer would not be possible for your third question.

ADDENDUM
The third question is actually a bit difficult to answer. The phenotypes will be $\text{A*B*}$=Red, $\text{A*bb}$=Magenta, $\text{aa**}$=white. This gives us $9:3:4$ for Red:Magenta:white. Now the fact that recessive at one locus , Gene A, suppresses the phenotype altogether no matter what the genotype at the other locus, means that one of the phenomenon exhibited is recessive epistasis, where Gene A is the epistatic loci and Gene B is the Hypostatic loci. But, the fact that there are two distinct phenotypes with the epistatic gene dominant, means the interaction is not complementary ($9:7$) but is supplementary ($9:3:4$). This distinction is necessary, and it essentially means that the "intermediate" of the elucidated pathway is also coloured. Otherwise, like in Flower colour in Lathyrus Odoratus, the phenotypes of $\text{aa**}$ and $\text{A*bb}$ are same, and hence the phenotypic ration remains $9:7$. For a ratio of $13:3$ you need domianant epistasis and the phenotypes of double recessive and the epistatic recessive must match. Here, it is recessive epistasis, as the recessive condition at one locus suppresses the expression a other, and not dominant. Feel free to seek further clarifications or simplification.

The way I understood the problem is like this.

a) The parents are said to be pure bred so we can assume that both parents posses homozygous for each of the traits. Hence, the genotype for both are:

-since the absence of gene A will not code for the magenta intermediate, it's fine to activate gene B because this will not work without gene A.

b) the ratio that will be observed on the F2 generation are: 9 red: 3 magenta: 4 white

c) the interaction of the genes pertains to recessive epistasis. The following ratios are constant for each of the epistatic interaction:

Not the answer you're looking for? Browse other questions tagged genetics homework epigenetics allele or ask your own question.

4
Predicting progeny of recessive mutations using recombination
2
Genetics independent assortment?
1
Population Genetics Question
4
Epistasis Involving Multiple Loci
2
Albinism inheritance problem: what are the father's alleles if he got an albino kid?
1
The drawing of genetic crosses
5
How can I verify my true genetic relationship with my close relatives with simple physical traits?
0
How deep underwater could you breathe using a tube which breaks the surface until the water pressure makes it impossible to inhale air?