Why is the thalamic reticular nucleus called a nucleus?

In the Wikipedia article on nuclei I read:

A nucleus is one of the two most common forms of nerve cell organization, the other being layered structures.

Is there a specific and plausible reason, why the thalamic reticular nucleus is called a nucleus, even though it is - anatomically - a layer?

Has the TRN once been a somehow spherical nucleus and evolved into a two-dimensional layer? Or does the TRN play a functional role that normally nuclei play, but not layers?

A nucleus is defined as a

Reticular is defined as

A fine network or net-like structure.

So reticular nucleus translates itself as a net-like accumulation of neurons.

In contrast to the wikipedia meaning, therefore, I interpret nucleus as more of a cluster of functional organizational units rather than a morphological characteristic of that cluster per se. 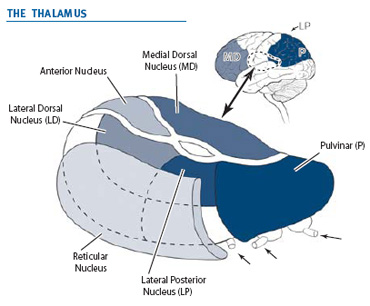 The term "nucleus" is in some cases used rather loosely, to mean simply an identifiably distinct group of neurons, even if they are spread over an extended area. The reticular nucleus of the thalamus, for example, is a thin layer of inhibitory neurons that surrounds the thalamus.

Not the answer you're looking for? Browse other questions tagged neuroanatomy nomenclature or ask your own question.

6
Why is it called "Ebola virus disease", not just "Ebola" or "Ebola disease"?
8
What is called the "area size that an animal usually lives in"?
4
Why is the prefrontal cortex called such?
0
Why are the neurites from hair cells to spiral ganglion cells called axons?
2
Why are the posterior and anterior inferior temporal cortex called area TEO and area TE respectively?
1
Why are spinal nerves considered a part of PNS while the spinal cord is a part of CNS?
0
Why are Excavata called "Excavata"?
2
Why is the ratio between action potential and threshold value called the 'safety factor'?
1
Why proprioceptive fibres (of CN V) have their cell bodies in mesencephalic trigeminal nucleus?