What are differences between formation of embryonic disc in chick and mammal embryo?

Exam question which got lowest average points in my university: 1/5 average. No markscheme available so my attempt below.

I assume that embryonic disk prefers to germ disk such that Formation prefers to only to the 3rd developmental week because of the Wikipedia fact. I also went through the points during 2nd week of development and did not notice major differences. So let's consider only the 3rd week:

The following differences are based mostly on Gilbert's Developmental Biology 9e -book.

What are the differences between formation of embryonic disc in chick and mammal embryo?

Embryonic disc forms on top of yolk during cleavage on chicken embryo, while between amniotic sac and yolk sac inside blastocyst after implantation on human embryo.

Some further processes take place on and in the embryonic disc: specifically these here during the week 3.

Formation of the primitive streak: The process of primary neurulation appears to be similar in chick and mammalian. The embryonic disc becomes oval and then pear-shaped, the wider end being directed forward. Near the narrow, posterior end, the primitive streak makes its appearance and extends along the middle of the disc for about one-half of its length from migrated ectoderm cells.

Genesis of the notochord: “The notochord extends beneath the neural tube from the base of the head into the tail.” - As the mesoderm develops between the ectoderm and endoderm it is separated into lateral halves by the neural tube and notochord.

Figure 2: Neurulation. NB the use of neural groove is correct. Notochord is below neural groove. - Genesis of germ layers here: from a flat thing to a developed one. 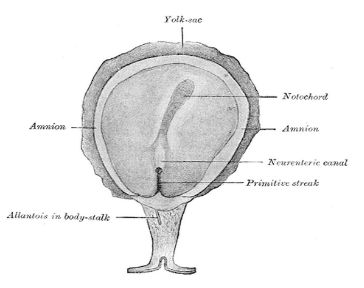 Not the answer you're looking for? Browse other questions tagged human-biology homework embryology chickens or ask your own question.

6
What forms the human amniotic sac?
3
Does chicken embryo form the disc called "discoblast" in the cleavage and blastulation of chicken?

7
Fetal development, gastrulation and embryonic disc
3
Does chicken embryo form the disc called "discoblast" in the cleavage and blastulation of chicken?
3
Differences between right and left handed people
1
What's the difference between an embryo and a fetus?
1
Why is the threshold between human embryo and human fetus defined as 8 weeks after fertilization?
4
What are the differences between a benign tumor and swelling?