which signalling pathway is involved in cancer?

Columnar epithelial cells from the colonic mucosa are studied to identify abnormalities in cell signaling pathways. Abnormal epithelial cells from colonic adenocarcinoma are shown to have a mutation that blocks hydrolysis of GTP-bound active RAS. Normal columnar cells have active RAS protein that undergoes hydrolysis to the inactive GDP-bound form. Which of the following signaling pathways is most likely abnormally stimulated in the carcinoma cells?

I think its MAP kinase pathway because RAS is part of MAP kinase pathway that ultimately leads to transcription and expression of genes but if GTP is not hydrolyzed then RAS will be constantly activated leading to continued gene expression that may lead to cancer but I am not completely sure about it because p53 is also a tumor suppressor gene.

The answer is b, as the mutation constantly activates the RAS protein. RAS is part of the MAP-Kinase pathway, constant signaling of it permanently activates this pathway and leads to changes in gene expression. See the image below: 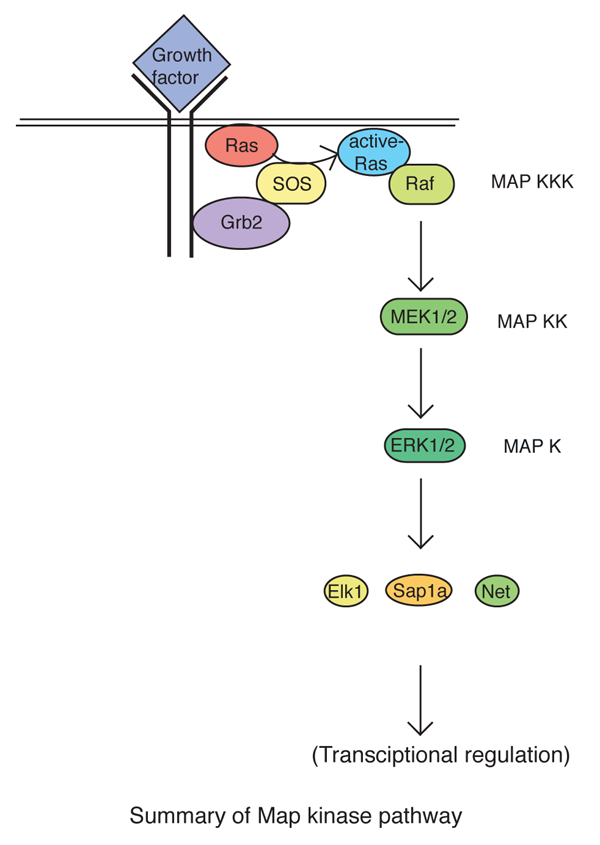 If you are interested in more details, have a look at these papers:

Not the answer you're looking for? Browse other questions tagged biochemistry homework cancer cell-signaling or ask your own question.

2
Which cells will pass cancer to offspring?
5
Effect of testosterone hormone on cell signalling and behaviour?
2
Regarding signalling pathways
8
All UniprotIDs of a cancer pathway
6
Expression/Mechanism of ROR1 in healthy tissue
17
Contact Inhibition of Cell Division: Signaling Pathway
0
Signaling pathways with Receptor Tyrosine Kinase clarification
4
Specific examples of signalling pathway using logical 'OR' and 'AND'?
1
Are these 2 procedures to fight cancer (cancer "vaccine", and cancer drugs which can attack all tumours) related?