How to make GABA pass the blood brain barrier?

I thought of methylating GABA at the gamma amino group in order to make it pass the blood brain barrier, but would it work?

The goal is to make a sedative. Like GHB or benzodiazepines (I know that benzos have a totally different structure)

Any ideas on how to make GABA pass the blood brain barrier?

Short answer
Chemical reversible shielding of the aminogroup in GABA seems to be sufficient to get it into the brain as a Trojan horse.

Given that you ask

...how to make GABA pass the blood brain barrier?

GABA (Fig. 1) has 3 hydrophylic groups that may prevent it to cross the blood-brain barrier (BBB), namely a hydroxyl-, a keto- and an amine-group. The BBB generally only permits passive entry of small hydrophobic molecules. The amino-group in turn is also prone to de-amination by mono-amino oxidase inhibitors.

An often-used method to get drugs into the brain is shielding of pesky hydrophilic and/or fragile chemical groups by certain molecules that are irreversibly bound to them. A well-known example of shielding a fragile amino-group is the B-methylation of phenetylamine compounds into their amphetamine analogues. Alpha-amination to a methamphetamine further stabilizes the essential amino-group. Amphetamines and methamphetamines are way more stable in the brain than their phenetylamine precursors and likely enter the BBB also more swiftly because they are more hydrophobic by shielding the amino group (Shulgin, 1990).

However, those methyl groups are irreversibly bound, so it's not an option here, as apparently you wish to increase GABA, and not an active derivative of it.

Now, another way is using a Trojan horse method (Pardridge, 2006); by reversibly shielding the essential amine group the drug can enter the brain, where it is converted back to its original compound. Picamilon does the job here. Smarter Nootropics say;

First developed in the early 1970s in the Soviet Union, picamilon (alongside phenibut) is an “enhanced” form of GABA that is capable of crossing the blood brain barrier when taken as a supplement.Inside the brain, picamilon is rapidly hydrolyzed into its constituent parts; niacin and GABA. Niacin helps to enhance brain blood flow through its vasodilatory properties []. 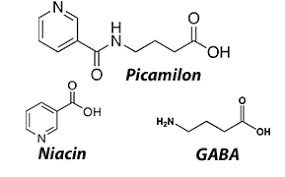 Not the answer you're looking for? Browse other questions tagged neuroscience pharmacology pharmacokinetics pharmacodynamics psychoneuropharmacology or ask your own question.

12
Why doesn't a substance like loperamide promote analgesia?
10
How does the brain avoid feedback loops?
2
How isolated are different areas of the brain?
5
How does the brain know what to remember and what not?
7
How does aspirin “thin” blood?
5
Derivation for drug half life
3
How do Neurotransmitters get into the neurons?
6
What structural features make a molecule a potent opioid receptor agonist?